Opening of the new space with the exhibition of Andy Warhol that combines drawings and collages of pop stars; on views major works from his series dating from between 1975 and 1986. The show of Balkenhol is focused on artists's technical mastery and on the diversity of his intellectual and cultural references. The human form, animals, and recently also architecture, are the motifs Balkenhol which chooses for his sculptures, drawings and photographs. 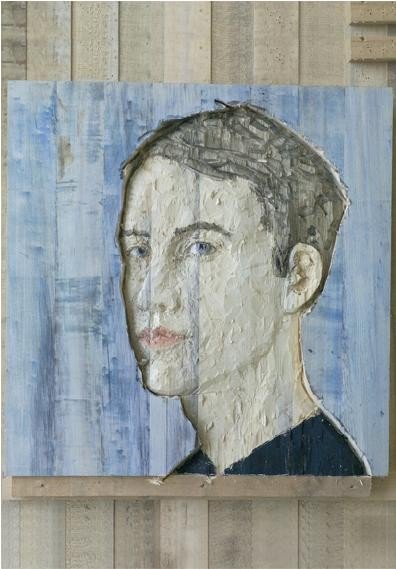 The Galerie Thaddaeus Ropac is pleased to announce the opening of the new drawing space with the exhibition of Andy Warhol's Popstars. The exhibition of this group of works was organized by the gallery for the Albertina Museum of Vienna.

In collaboration with the Andy Warhol Foundation for the Visual Arts, New York, to coincide with the 20th anniversary of Warhol's death, this exhibition will combine drawings and collages of pop stars, one of his primary themes. We will be presenting major works from his Popstars series dating from between 1975 and 1986.

Andy Warhol, who started out in the 1950s as a commercial artist in New York, was intimately familiar with the medium of drawing and photography. Drawing was relevant to the artist in a twofold way : On the one hand, he used it as a « tool », producing preliminary studies for his well-known subjects, such as the 'disaster' paintings, portraits, and icons of consumerism ; on the other hand, he presented the drawing as a work of art in its own right, where he used the « artificial processes » of overhead projection, silk-screen printing, or superimposed photography.

Andy Warhol's Popstars graphite drawings were developed in a creative process comprising two stages. First, Warhol took Polaroids of pop musicians, actors, and singers, which he subsequently projected onto the wall, and onto the paper mounted there, by means of overhead projection. Finally, using a gray graphite pencil, he traced the outlines that seemed most significant to him in order to mark the features of his sitters. These graphite drawings may also be considered as models and studies for the colored acrylic and silk-screen pictures executed by Warhol of the same personalities.

The artist invites the exhibition's visitors into his private viewing room. There they will encounter Aretha Franklin, Liza Minnelli, Charles Aznavour, as well as the Beatles and the Rolling Stones, over and over again. From 1963 onwards, Warhol entertained a particularly close relationship with the Stones. Mick Jagger, androgynous icon and paragon of the zeitgeist of those days, was committed to paper by Warhol's reduced and perfect penciling. In the mid-1970s, Warhol made the designs for the album cover of Love You Live, which appeared in 1977 at Virgin Records. The original drawings of the Love You Live series and the ingenious portraits of Mick Jagger are certainly the climax of the exhibition.

“My sculptures don't tell stories. Something mysterious is concealed in them. It's not my task to reveal this, but the task of the viewer to discover it.”
Stephan Balkenhol

Stephan Balkenhol (born 1957) is one of those trail-blazing German sculptors who in the last two decades has also exerted a great influence internationally. The Staatliche Kunsthalle Baden-Baden is devoting an extensive exhibition to the oeuvre of this sculptor, who has been teaching at the Kunstakademie Karlsruhe since 1992. The show will focus on Balkenhol's technical mastery and on the diversity of his intellectual and cultural references. The human form, the head, animals, and recently also architecture, are the motifs Balkenhol which chooses for his sculptures, drawings and photographs.
To a certain extent Balkenhol's creative approach is a response to the minimalist strategies of Ullrich Rückriem, his teacher at the Hochschule für bildende Künste in Hamburg from 1976 to 1982. Since the early 1980s, Balkenhol has been exploring what can actually be shown, sensed, seen by means of statuary images against the backdrop of the current engagement with the tradition of classical sculpture.
At the centre of Balkenhol's work is the human form. The artist gouges his figures out of the tree trunk; traces left by the tools, branch notches and splits in the wood are left visible. Paint is used in a reduced form to structure the sculpture. The figures seem both personal and anonymous. Gestures, poses and facial expressions suggest both inner distance and an attentive openness towards the viewer. Balkenhol's figures are not lively “storytellers”. Instead the artist seeks to condense human physiognomy and appearance, with the result that his figures seem unpretentious, unobtrusive and simultaneously removed from time: “I don't want talkative, expressive figures, which is why I seek an open expression from out of which all states are possible.” The openness of his figures, the renunciation of gesture and a narrative context, is a counter reaction to a deliberately present-oriented or illustrative figuration that may well address an individual aspect, but, being a kind of instantaneous take, restricts all other possible interpretations.
The freedom and easy accessibility of Balkenhol's work is due to this kind of strange closeness. By turning to themes of everyday in his sculptures, reliefs and extensive installations, the artist has fathomed new aesthetic dimensions – also in the public domain and in the context of architecture – and thereby made new options available for contemporary sculpture.
In addition to the sculptures and reliefs dedicated to the human figure, the animal, mythical motifs and architecture, the exhibition will feature the many-sided and often less known facets of this artist's sculptural work and his large drawings and photographs.
The show was curated by Matthias Winzen in close collaboration with Stephan Balkenhol; an extensive and richly-illustrated catalogue in German and English will be published.