After multimedia (2003) and sculpture/installation (2005), this year's exhibition presents the current, multi-facetted aspect of painting in Germany on the basis of the work of eight contemporary artists. The differing positions range from the abstract via the figurative to the conceptual. 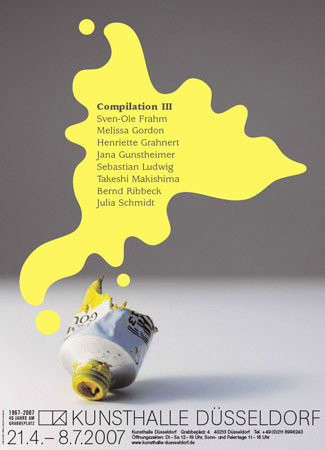 Young painting in the Kunsthalle

Young painting in the Kunsthalle: Compilation III presents new positions from the cities of Berlin, Düssel-dorf, Jena and Leipzig. The Kunsthalle continues its recent series of exhibitions initiated four years ago in the form of Compilation III. Following on from the exhibitions focusing upon video, photography and film (2003), and sculpture and installation (2005), this year's exhibition presents the current, multi-facetted aspect of painting in Germany on the basis of the work of eight contemporary artists. The differing posi-tions range from the abstract via the figurative to the conceptual. Beyond all categorization or adherence to schools, the exhibition questions the actuality of the medium and invites the public to discover the works of an exciting, young generation of artists.

Sven-Ole Frahm (*1972, lives and works in Düsseldorf) has taken up and adapted artistic procedures from the 1950s and 1960s, which used both chance and the blot as structural elements in painting. Through Frahm's technique of cutting and rearranging the canvas, new controlled uncontrollable compositions arise using both paint and the pictures themselves as pictorial media.

Melissa Gordon (*1981, lives and works in Berlin) works with narrative structures, which she continues to weave within a work group. She often uses found material that she transforms and combines. In her compositions, different information and ways of seeing, historical perspectives and interpretations are superimposed. She has developed a series for Compilation III concerned with the broad topic of collecting and presentation. Henriette Grahnert (*1977, lives and works in Leipzig) operates along the interface between figurative and abstract pictorial language, experimenting both with materials and technique. Her compositions frequently appear to be made up from the detritus and peripheral material from the painting process itself. Abstract forms coalesce to suggest figures, whose pictorial wit is far highly ambiguous.

Jana Gunstheimer (*1974, lives and works in Jena) uses painting as a documentary medium. In her fictitious organisations, which develop covertly as parallel worlds to society, black and white watercolours and installations document apparently real sociological experiments and shadowy characters in a world devoid of perspective. Sebastian Ludwig's (*1977, lives and works in Düsseldorf) compositions resemble stages, upon which small dramas are enacted. Ludwig experiments with different painting techniques and draws upon the treasure trove of historical motifs, which he takes among others from the painting of the early Renaissance. His multi-layered painterly spaces cover the whole range from architecture to ornament, from landscape and interior view.

Takeshi Makishima's (*1980, lives and works in Düsseldorf) compositions seem diegetic and removed from the world. He creates surreal worlds with his painting, in which solitary figures or animals encounter one another. Many of the unusual scenarios are inspired by global youth culture, but ultimately elude absolute decipherment by virtue of their dreamlike atmosphere. Bernd Ribbeck (*1974, lives and works in Berlin) makes reference to abstract tendencies from the 20th Century, which discovered transcendence and cosmic harmony expressed in a geometric pictorial language. The geometric forms on picture grounds heavily worked with acrylic paint are designed using coloured crayon, biro and permanent marker pen. Julia Schmidt's (*1976, lives and works in Leipzig) theme is painting itself. She mostly uses found pictures from various sources that have been either cut into or opened up, reduced to a seemingly unimportant detail or ones that exhort a new perspective by means of their enrichment through painting. The investigation of the medium precipitates a sensual, seductive form of painting.

A catalogue is published to accompany the exhibition by DuMont Kunst und Literatur Verlag, Cologne.