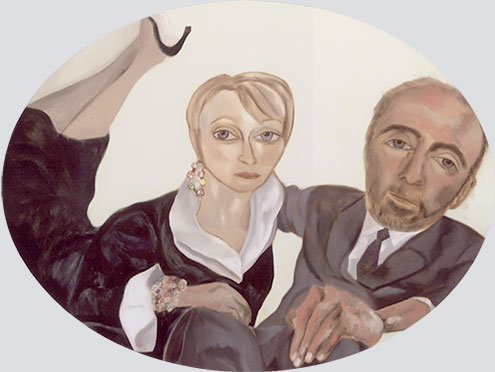 On 5 May 2007 the Mary Boone Gallery will open at its Chelsea location “Por-traits”, an exhibition of paintings by FRANCESCO CLEMENTE.

The sixteen portraits that comprise the exhibition were all painted in the Artist’s New York studio between 1999 and the present. The subjects include individuals prominent in the New York art world, such as Helen Marden, Shel- ley Aarons, and Lisa Dennison (who organized Clemente’s 1999 Guggenheim Museum retrospective). Their reclining bodies seemingly float across the exaggerated horizontal surface of the canvas as they proffer the viewer a dis- tinctive gesture and an enigmatic gaze.

For portraits of art-collector couples, Clemente uses a large oval format. Works like “Kent Logan and Vicki Logan”, “Ray Learsy and Melva Bucksbaum”, and “Andy Hall and Christine Hall” conflate the mystery of one soul with the mystery of human relationships.

A fully illustrated catalogue with essay by Brooks Adams will be available at the Gallery.

On 3 May 2007 Mary Boone Gallery will open at its Fifth Avenue location “Sphinx”, an exhibition of new sculpture and related watercolors by MARC QUINN.

This exhibition will mark the first time the complete series of “Sphinx” sculp- tures have been shown. Each work in the series depicts the well-known fash- ion model Kate Moss in a different advanced Yoga position. Although highly realistic, the white-painted bronze sculptures are not portraits, but rather represent, in the Artist’s words, “an image, and the way that image is twisted and sculpted by our collective desire”.

Freedom from worldly desire informs the drastically different look of the final work in the series, “Sphinx (Road to Enlightenment)”. Here, a brilliant bronze surface is used. The model’s iconic face appears on an emaciated body in the lotus position; a flowing robe echoes the undulation of her pronounced ribs.

Quinn provokes us to reconcile the ascetic condition of this figure with the world of celebrity and glamour that his famously recognizable subject evokes.

Please contact the Gallery if we can be of further assistance, or visit our web- site.