Li Luming in his grey-on-grey, virtually monochrome paintings, documents people, their work, and their private lives during the Cultural Revolution. Cui Guotai's pictures show the decline of the Chinese steel industry, the inescapable structural decay. 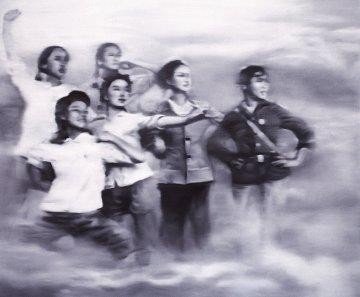 Li Luming (b. 1956 in Shaoyang, Provinz Hunan, China) returns to the years 1965 to 1975 in his grey-on-grey, virtually monochrome paintings and documents people, their work, and their private lives during the Cultural Revolution. The artist consciously makes reference to the form and content of Gerhard Richter’s “Baader-Meinhof” Cycle “18. Oktober 1977”, created in 1988. Similarly, to Li Luming representations of the Cultural Revolution serve as a starting point for thinking about ideology, memory and the shattering of illusion.

He too, transfers extant black-and-white photographs into the medium of oil painting, blurring them in the process. Often, his subjects are Chinese “icons”. However, Li Luming, like Gerhard Richter and in contrast to the following generation of Chinese artists – the „Cynical Realists“ – abstains from commenting. And so the paintings themselves become comments within the context of an a-historic reception of the own in China.

The architectural studies by the Chinese artist Cui Guotai (born 1964 in Shenyang, Provinz Liaoning, China) show thematically show the decline of the Chinese steel industry, the inescapable structural decay. The buildings and technical installations of Shenyang, the former center of the Chinese heavy industry, are memorials to the planned economy and the absolute belief in progress. Today, they are mainly proof of despicably inhuman working conditions, but also of the transitory nature of life and the futile promises of material happiness.

Guotai’s pictures confront us with this process of destruction, which is part of a cogent historical cycle. The structure and composition of his paintings are characterized by impressive precision. At the same time, they create a very specific tension. Onlookers follow the traces of gradual rotting and disintegration under a grey sky that hangs leaden and mute over the ailing factories and their equipment. At the same time, one repeatedly senses an element of uncertainty – a threat. The fragile balance of this construction could fall apart at any moment, more or less burying the onlooker.