Memorial to the Iraq War

26 artists from around the world has been invited to partecipate to this project. The intention is not to find a definitive memorial to a war - a difficult task at any time, and especially in the context of an ongoing conflict. Instead the exhibition explores different views of the Iraq War, and different perspectives on what can or should be memorialised. Works by: Lida Abdul, Tony Chakar, Yael Davids, Jeremy Deller, Sam Durant, Chris Evans, Matias Faldbakken, Liam Gillick and others. 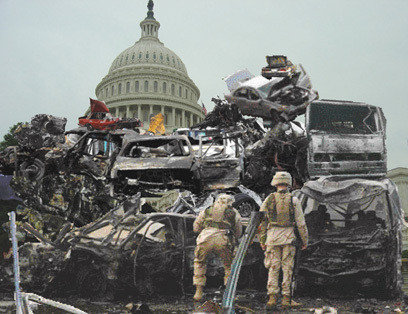 The ICA has invited 26 artists from around the world to make proposals for a memorial to the Iraq War. These memorials address topics such as the invasion and occupation of Iraq, the country's slide into civil war, the deaths of soldiers and civilians, and the conflict's relation to global jihadism and the War on Terror.

The intention is not to find a definitive memorial to a war - a difficult task at any time, and especially in the context of an ongoing conflict. Instead the exhibition explores different views of the Iraq War, and different perspectives on what can or should be memorialised.

The proposals include sketches, models and videos, and some proposals will be realised in the galleries in larger form. The ICA's location on the Mall makes this venue especially appropriate for an exhibition of this sort: in the heart of Westminster and in the area of London most dense with monuments.

The siege of Fallujah in April 2004 was one of the most extensive human rights violations of recent times. Breaching over 70 articles of the Geneva conventions, US forces bombed schools and hospitals, sniped civilians (including children) holding white flags, cut off water and medical supplies, and deployed both napalm and white phosphorous, banned by the UN. At the time, journalists from all nations were actively prevented from entering the city, and even now the full truth of these events has never been made public.

Written and directed by Dr Jonathan Holmes, Fallujah draws on research and interviews carried out by the playwright and triple Nobel Prize nominee Dr Scilla Elworthy. This play presents testimony from those at the heart of the siege: Iraqi civilians, clerics, US military and politicians, journalists, medics and aid workers and the British Army. None of this testimony has been heard before. Every word of this play is verbatim from the testimony.

Ilium Productions have brought together leading artistic figures to create a powerful cross-disciplinary piece. Lucy and Jorge Orta's set and Nitin Sawhney's score will provide aural and visual landscapes within which the testimonies are given a visceral and highly evocative platform. During the performance, the audience will be taken on a physical as well as emotive journey to witness interviews and events. The play will be performed by some of the UK's highest profile actors.

Running time: 90 mins with no interval.