On view a series of photographs depicting human figures which have become fragmented bodies as they are entwined, connected and disconnected, subtending the idea of a human body which, being part of nature, is always similar to itself. 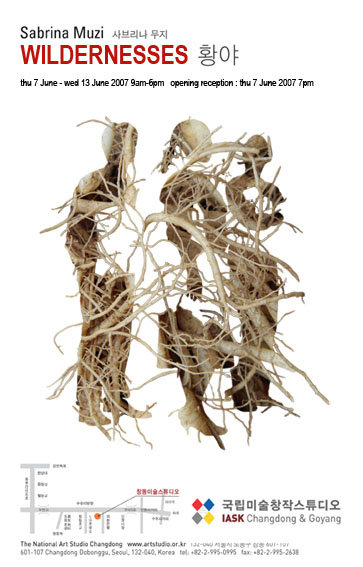 Sabrina Muzi (Italy) works with images of the body, through video, performance, photography and installation to address psychological moments in our lives and relationships between people. Her most recent work, Wildernesses attempts to explore the connections between human and nature.

In this exhibition she presents a series of photographs containing an idea that the human body is all connecte d to natural organic elements and our more primitive history. These contemporary figures have become fragmented bodies as they are entwined, connected and disconnected.

This kind of idea can be coupled with Fractal theory that a human body as a part of nature is always similar to itself. Also, it can be combined with animism that all creations have their own spirit and are controlled by each other.

In order to support this idea, she makes silhouettes of people merged with natural elements like roots, and shows us another vitality from the inside of a human body and nature.