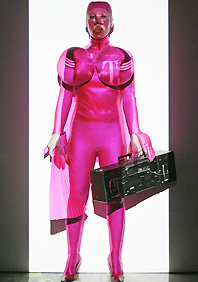 "Lost & Found" is an exhibition about Pop and about how artists deal with a matter, where borders between appropriation and absorption quickly blur. "Lost & Found" talks about lamented losses and happily shared discoveries. "Lost" - means the loss of contumaciousness and glamorous exceedance. Both only seem to be melancholy memory as pop got lost in common sense. "Found" - is the emancipatory code conversion and the enthusiastic distribution of pop cultural fragments. They stem from all over the world and offer something for everybody.

The diminishing power of definition of culture redactors, about what good, new and subversive in music or films, the new distribution channels such as file sharing platforms, web logs, and pod casts are opposed. We, who assiduously recorded mix tapes and thereby also exchanged opinions, today exchange digital data back and forth. This connects us with unknown people with whom we exchange data for a short time, but do we also share the same political views? Therefore we ask: Where is the politicisation of a receiving or/and producing individual accounted today? Where can anti-hegemonial life and/or gender concepts and feministic issues in the cultural production be located?

In a consciously un-nostalgic way "Lost & Found" looks at how cultural production can be received actively and what actual possibilities of cultural self-empowerment are there?

The consumer as a cultural producer opens up a productive space in which pop creations can be re-discovered under a subjective perspective and re-interpreted in a feminist and/or queer way. The project "Lost & Found" is also about proclaiming an alternative historiography and about ing pop-feminists networks into the cultural memory.