Anita Di Bianco makes clear that narration is a precise artistic process still occupying a place as an artistic strategy. The fact that this exhibition is called 'Against the Grain', therefore, is to be understood first and foremost as a metaphor of this medium's individuality and self-will. Roland Boden is only projecting his video work 'Dream of the Sleeper, vol.2.'. 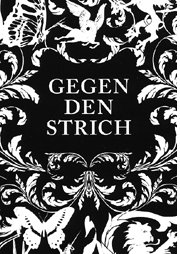 The works of Anita Di Bianco make clear that narration is a precise artistic process still occupying a place as an artistic strategy; she draws her material for re-writing, re-staging or re-telling from literature in order to transform its already familiar content in the medium of film.

In her exhibition "Versteller" (Masquerader) Anita Di Bianco projects two films. "Du Rêve et des Drogues/Dreaming and Drugs" shows excerpts from an interview with the French writer Marguerite Yourcenar held in 1980 in the form of a cinematic scenario. Yourcenar is embodied by a young male actor, who subjectively interprets the links between history and imagination, and self-reassurance and fictional invention. By contrast, "Ballad in Plain D" transposes Campo Santo - a collection of prose and essays by the writer W.G. Sebald, who died in 2001 - into the surreal setting of the "Cité Administrative" in Brussels.

The title also expresses Di Bianco’s method of respecting the authorship of others while interpreting content, ideas and stories in a new way; the word “Versteller”, which comes from the Yiddish, was used to refer to those “interpreters” who - in the age of silent film – recounted to the audience what the film protagonists said, though and felt, acting as mediators between author, actors and the audience.

“Against the Grain” is a translation of the French title “À Rebours” of a novel by Joris-Karl Huysman. First published in 1884, this novel’s almost painfully detailed descriptions of the unthinkable obsessions of the overwrought, sensitive young nobleman Jean Floressas des Esseintes made it into a key novel of French symbolism and the decadence movement. Not least, in 1891 des Esseintes was a model for Oscar Wilde’s character Dorian Gray, who was also a dandy epitomising the modern narcissist.

Symbolism and Gothicism are returning. Reminiscences of Romanticism and the Baroque, celebrated melancholy, a tendency to the grotesque and reflections of occult religions are experiencing a renaissance, turning exhibition spaces into the home of witches, monsters and vampires. One could perhaps even refer to a new mysticism, which has also discovered its own intimate, private medium in drawing.

The fact that this exhibition is called “Against the Grain”, therefore, is to be understood first and foremost as a metaphor of this medium’s individuality and self-will. But the title also holds a wealth of references to a cult book from the turn of the previous century, when Joris-Karl Huysman’s sensationally successful novel “À Rebours”, in English “Against the Grain”, delighted readers with its ecstatic visions of the end of the world.

The new mysticism also celebrates the irrational and may be scrutinised as a strategy of flight. However, its sometimes over-exaggerated aestheticism - which is apparently able to cut out the political completely - is always an additional criticism of the media and a game with social roles and one’s own identity.

Against the Grain includes numerous works by twenty international artists who live in Berlin, or whose work was given vital impulses during their stay in the city.

Roland Boden is only projecting his video work “Dream of the Sleeper, vol.2.” in the intimate space of Studio 4 for two days. A number of night-time scenarios are presented in a series of entirely computer-generated sequences, although there is no direct action or plot. The video will be shown together with mural drawings and a model.

The term "sleeper" is usually employed in the secret services to apply to people who - until they receive a specific code - live inconspicuous, usually bourgeois lives. After receiving a trigger code, they carry out a task that has been precisely determined in advance - for example an assault on property or persons. As a rule, the sleeper’s previous existence is then brought to an end.