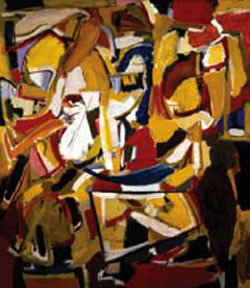 This summer, through the generosity of Wesley and Mary Hampton, Grand Gestures: The Gordon F. Hampton Collection will be presented at the UAM from June 28-August 12. “This gift by Wesley and Mary Hampton has provided the UAM an important opportunity to showcase the collection and continue researching many of its important works,” stated UAM Director Christopher Scoates. “One of our most valuable resources is the Hampton Collection. This incredible body of work has been the inspiration for several exhibitions since 1999, but we have barely scratched the surface.” In recognition of this fabulous gift, the UAM will honor Wesley G. Hampton on June 28th by inaugurating the Wesley G. Hampton Gallery. The ceremony is scheduled for 5 PM and will be hosted by CSULB President King Alexander and UAM Director Christopher Scoates.

Artists included in the exhibition: are Gillian Ayeres, William Brice, Stuart Davis, Richard Diebenkorn, Chris Dyson, Ole (Jurgen) Fischer, Sam Francis, Michael Goldberg, Adolph Gottlieb, Nancy Graves, Al Held, Roger Herman, David Hockney, Sara Holt, Ellsworth Kelly, Lee Krasner, William Mahan, Robert Rauschenberg, Milton Resnick, Jean Tinguely, Robert Walker, Andy Warhol, and Emerson Woelffer. Laurie Monahan – With a Ph.D. from Harvard University, Laurie Monahan is currently an associate professor at University of California, Santa Barbara. Monahan specializes in early 20th century European painting and visual culture, with an emphasis on Surrealism and related movements from the 1920s and 1930s. Her research interests extend into the post-WWII period, with a focus on cultural relations between Europe and the U.S., and in the 1960s in particular. She is currently fi nishing a book entitled A Knife into Dreams: Andre Masson, Massacres, Surrealism of the 1930s. Committed to extending the parameters of scholarly research beyond the boundaries of the University, Monahan has participated as a presenter and respondent in the ‘Works in Progress” series at the Getty Research Center.

2007 Summer Film Series
Fridays and Saturdays from June 29 – August 11, 2007, 12:30 and 2:30 PM
To coincide with the exhibition Grand Gestures the UAM will present seminal shorts; documentaries; and feature films from the 1950s when Abstract Expressionism, an American post-World War II art movement, became the focus of painting in New York City. This series concentrates on the creative world, and highlights the work of directors Kenneth Anger, Robert Frank, Alfred Hitchcock, John Huston, Joseph Mankiewicz, and Nicholas Ray. Feature films included in the series are The Asphalt Jungle, Rebel Without a Cause, Vertigo, All About Eve, and Pollock. For schedule and a complete listing please visit our web site. Free Admission.