Feelings will include a comprehensive survey of Creed's work in the CCS Galleries as well as an intervention in the recently opened Hessel Museum of Art where several of his works will be installed to propose new ways of experiencing the Hessel Collection. 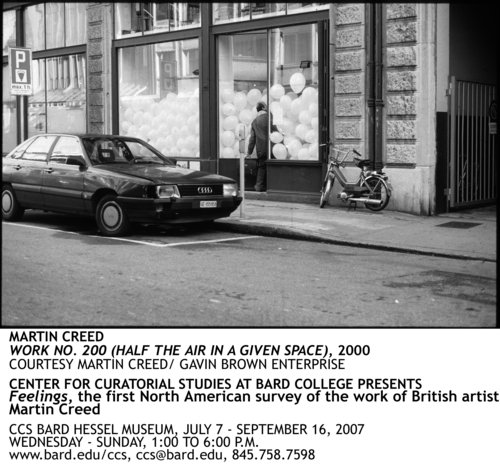 Feelings will include a comprehensive survey of Creed's work in the CCS Galleries as well as an intervention in the recently opened Hessel Museum of Art where several of his works will be installed to propose new ways of experiencing the Hessel Collection.

From July 7 through September 16 2007, the Center for Curatorial Studies at Bard College presents the first North American survey of the work of British artist Martin Creed. Working both inside and outside of galleries and museums, he has gained a reputation as one of the most critically incisive yet widely ranging artists of his generation. Creed has become particularly renowned for his aggressive deployment of a range of seemingly banal materials such as a blob of blu-tak stuck in the center of a wall, sheets of letter paper that are filled in with highlighter or ballpoint pen, collections of an enormous variety of balls, stacks of lumber, or neon spelling out simple words or phrases such as 'Things', 'Feelings' or 'Everything is going to be alright'. Even as such works appear to aim for a Minimalist degree-zero of sculpture, their deadpan humor surprisingly invokes a broad range of potential meanings and emotional responses from fear and anxiety to pleasure and empathy.

Creed's is a democratic art. Rather than finding beauty in traditional hierarchies, he finds potential in all manner of ordinary materials and objects found in the world around us. Even as he draws on structural techniques and presentation strategies from Minimalism and Conceptualism, he also draws from the Do-It-Yourself spirit of punk. He does not restrict himself to a single medium but instead ranges between sculpture, drawing, installation, video, sound, and music. Recently Creed has said that 'I try to try many things. I don't believe enough in one thing to do just one thing. I can't. I've had enough.'Many of his works subvert the traditional hierarchies that we use to draw distinctions between different materials, objects, actions or events. There are several ways in which Creed does this. One way is to accumulate an absurdly large variety of a specific category of object. For example, many different kinds of balls or many sheets of paper, each filled in with the marks made by different pens. En masse such objects produce a clear sense of unity that is strengthened rather than diminished by the differences between the many unique objects. Sometimes Creed creates equivalences not by flattening out differences but by emphasizing a specific variation between the objects. For example, he might arrange similar objects such as a group of trees or potted plants from tallest to shortest, steel I-beams or timber planks might be stacked in clear order from biggest to smallest. In his Work No. 593, commissioned for the opening of the Hessel Museum last year, he worked with orchestral musicians. In place of the usual instrumental hierarchies ' for example, a violinist in an orchestra is generally accorded more attention

Where many museums might give an artist a solo exhibition, rarely do they invite artists to intervene in or place their works in the context of other works from the collection. In the Hessel Museum it will be possible to view Creed's work in the context of minimal, conceptual and process-oriented art works, one of the core strengths of the Marieluise Hessel Collection. Even as his work historically emerges from these traditions ' organizing simple structures, the use of objects as integers in a larger series, a simple declarative use of materials ' his work also foregrounds aspects of such works that have become lost in the art historical context. It is difficult today to grasp the quality of exploratory play out of which Richard Serra, Donald Judd or Carl Andre might have become interested in weight and balance, in the texture of a sawcut, or a play of simple visible proportions. Instead we see their work as objective things disconnected from such process considerations or from more subjective concerns. The exhibition title Martin Creed: Feelings is drawn from Creed's neon sculpture of the same name that has recently been acquired for the Collection. It is meant as an invitation to play, to re-invest these seemingly concrete things with a full range of emotions and Feelings.

While there are several works by Creed juxtaposed throughout the installation, his major interventions will use light and motion to bring to the seemingly timeless experience of viewing art, something of the immediate durational qualities of music. Every few minutes, on weekends, a man or woman will run through the gallery, an act at once ordinary and surprising. Why is he running? Where is he running? Has something happened? As soon as you can ask yourself these questions, the runner is already gone, leaving in his wake of echoing footsteps only an amplified sense of silence. There are many works in the exhibition dealing with questions of gravity, weight and balance that will be charged by the anticipation created by the runners.

Light will be a major feature of the exhibition. Some works will be bathed in strong natural light while others will only be barely illuminated. Several works employ artificial light as a medium' specifically video monitors and projections, neon tubing, and fluorescent fixtures. One of Creed's most famous works, The Lights Going On and Off, will be installed and will intensify the experience of luminosity in the galleries.

Born in Wakefield, England in 1968, Creed graduated from the Slade School of Fine Art in 1990. He has exhibited and performed in solo and group exhibitions and biennales around the world. In 2001 he won the Turner Prize for his Work No. 227: The Lights Going On and Off. In the last year he has presented solo exhibitions and projects at Fondazione Nicola Trussardi, Milan; Curzon Mayfair Cinema, London; Hauser and Wirth, Z'rich; MC, Los Angeles; Michael Lett Gallery, Auckland; and Johnen Galerie, Berlin. His work was also featured in How to Improve the World, Hayward Gallery, London; Of Mice and Men: 4th Berlin Biennial for Contemporary Art; and Scape, 2006 Biennial of Art in Public Space, in Christchurch New Zealand among many others. His work is in the collections of some of the most important museums worldwide including the Museum of Modern Art, New York and Tate, London.