A videographic journey through MUSAC's Collection. The foremost purpose of the show is to reveal the wealth of formats through which video creation has been evolving in recent years, which, in keeping with its very foundational precepts, the Spanish institution's new collection is designed to mirror. Curated by Agustin Perez Rubio. 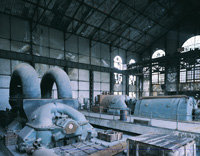 A videographic journey through MUSAC's Collection

An Interpersonal Journey is the exhibition with which MUSAC presents a selection of the video section of its collection for the pre-opening of the new contemporary art museum santralistambul (Istanbul, Turkey). The foremost purpose of the show is to reveal the wealth of formats through which video creation has been evolving in recent years, which, in keeping with its very foundational precepts, the Spanish institution's new collection is designed to mirror. Ranging from video-installations that include objects to multi-projections and sculptures that incorporate video, a selection of 14 pieces by internationally acclaimed artists will bring viewers closer to a medium that is now a classic within artistic parameters.

An Interpersonal Journey is also intended to be a conceptually rich selection that will rouse the viewer's interest in the possible relationships established between human beings. For this reason, this videographic overview has been divided into three acts, beginning with the first, which comprises the works that stem from the subjective and individual concerns of the artists themselves. Loss, alienation, loneliness and silence are the topics of conversation that Kimsooja, Pipilotti Rist, Pierre Huyghe, Patty Chang, Jon Mikel Euba and Tony Oursler establish with themselves.

In the second act, the central characters of the action -Jesper Just, Ana Laura Aláez, Shirin Neshat, Shoja Azari and Dora García- draw us into the intimate universe of relationships in twos. The confrontation of opposite and complementary elements such as man-woman, teacher-student, interrogator-interrogee, father-son, maturity-youth, etc., will take us to the third and last act, where the individual is represented as a group, whether materialized as a family or a friendly entity -Carles Congost-, an assemblage of strange, random bonds -Markus Schinwald-, or the portrait of a specific country -Fiona Tan.

An Interpersonal Journey is definitively MUSAC's response to the invitation from the santralistambul to produce an overview of its video collection that arises from individuality and ends in collectiveness, having first passed through the intimacy of a confrontation of two complementary and symmetric individuals.

santralistanbul is a project led by İstanbul Bilgi University (BİLGİ), involving the conversion of the Ottoman Empire's first power station - Silahtarağa Power Plant - into a Museum of Contemporary Arts, Museum of Energy and a cultural and educational centre. Silahtarağa Power Plant is situated at the heart of the Golden Horn, one of İstanbul's oldest industrial quarters, and was established in 1911, functioning until 1983. The power plant is a unique industrial heritage site and one of the best preserved in İstanbul.

With santralistanbul, this site of 118,000sqm will propel İstanbul into the global networks of creative arts and cultural production and play an important role in the process of becoming a European Capital of Culture. The transformation of Silahtarağa Power Plant, allocated to İstanbul Bilgi University by the Ministry of Energy and Natural Resources in 2004, into santralistanbul has reached its final stages with the contributions of the public and private sectors and civil society institutions, ready for the official opening in 2007.

The power plant that supplied electricity to İstanbul for nearly a century is now set to generate artistic and cultural currents in the city and the whole region. santralistanbul Museum of Contemporary Arts will stand on an area of approximately 7000sqm, in a building corresponding in form and size to the two boiler houses that formerly stood on the site. Art works from around the world, neighbouring regions and all over Turkey will be displayed in the Museum through programmed events and exhibitions. Museum will aim to become a platform for discussions and artistic exchange, a centre for creative production and a hub for regional and international art communities.

Curators and artists working with an interdisciplinary approach will be invited to organise challenging exhibitions that will arouse international interest and attract large numbers of visitors. Tours, courses and workshops will be organised in collaboration with the Ministry of Education and local municipalities to reaching out to broad cross-sections of society and particularly to inspire young people's interest in contemporary arts. The Museum of Contemporary Arts will not only be a place where visitors can watch works of art in a pleasant environment but also a centre of research and debate about the function of art in today's world.