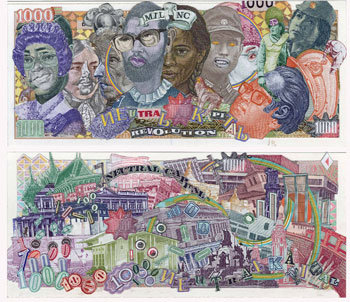 The artist will present work from his series titled Neutral Capital, which investigates the meaning of monetary value
San Diego, CA—On July 21, 2007, the Museum of Contemporary Art San Diego will open Cerca Series: Peter Simensky at its 1001 Kettner location in downtown San Diego. The exhibition will be on view through September 23, 2007.

New York artist Peter Simensky investigates tmechanisms by which value is assigned, accounted for, stored, and exchanged. He utilizes a strategy of appropriation that blurs the distinction between fiction and reality, art and commerce, to both participate in and critique the current overheated art market.

Under the umbrella title Neutral Capital, Simensky has developed an alternative currency system that acquires value through acquisition and exchange in the art market. Simensky hand collages from unstable global currencies to create his own paper money, which owes as much to Surrealist collage as to money imagery. Neutral Capital bill multiples, which were first presented at the 2005 Armory Show in New York, were bought by collectors who in turn used them to purchase artworks by other artists—at once assigning a market value to the currency and expanding their collection.

Each Neutral Capital bill presents a layered composition that plays with the implicit narratives represented in the highly detailed engravings created for national currencies.
A politics of nationalist identity is embedded in the intricate hero portraits and historical vignettes etched into money. Similarly, the Neutral Capital bills’ imagery portrays an imagined nation with its own heroic visionaries, revolutionaries, lovers, and fighters.

Fictional narratives and their transformation into reality through a combination of desire, aspiration, and ambition are central to this project. As Simensky explains, Neutral Capital “addresses the often changing parameters of value and the interchange of possibility that exists in all things that experience fortune and decline.”

The Cerca Series exhibition will present the original Neutral Capital bill collages and the Neutral Capital Collection—a mobile gallery-in-a-box that houses artworks by prominent international artists purchased using Neutral Capital. New video and sculptural plaster multiples, created in Los Angeles, San Diego, and Tijuana—made for this exhibition while the artist was in residency at the Tijuana artist space and gallery Lui Velazquez—expand Neutral Capital into the arena of informal trade, treasure hunts, and other speculative narratives.

Peter Simensky’s recent exhibitions include solo projects with the Swiss Institute of Contemporary Art, NYC (2005) and Project Row Houses, Houston (2005). He has participated in numerous group shows including Grow Your Own, Palais de Tokyo, Paris (2007), It's Not What You Know, It's Who You Know, Samson Projects, Boston (2006), Sport, Socrates Sculpture Park, NYC (2005), We Could Have Invited Everyone, Andrew Kreps Gallery, NYC (2005), and New Labor, Columbia University’s Robert Neiman Gallery, NYC (2005).

This exhibition is curated by MCASD Assistant Curator, Lucía Sanromán.

Cerca Series: Peter Simensky is made possible by members of MCASD’s Corporate Council.

Programs at MCASD Downtown are made possible, in part, by grants from The James Irvine Foundation and The Institute of Museum and Library Services (an independent Federal grant-making agency dedicated to creating and sustaining a nation of learners).

Suburban Sublime will present paintings, drawings, and photography from MCASD’s collection that reformulate traditional principles of the landscape genre to address urban sprawl and suburban expansion. Eighteenth-century notions of the “beautiful” and “sublime” landscape are at the base of contemporary attitudes towards the land. Artworks in Suburban Sublime utilize these art-historical and pictorial constructs to juxtapose contemporary land usage with commonly held, idealized concepts of the sanctity of nature. Paintings by Jean Lowe, mixed-media works by Douglas Huebler, and photography by Becky Cohen, among other works on view, overturn this relationship positioning human actions, rather than divine will, as the decisive force generating our contemporary dystopic landscape.

Harold Cohen, former director of the Center for Research in Computing and the Arts (CRCA) at the University of California, San Diego, is one of the few artists ever to become deeply involved in artificial intelligence as a process for art-making. He is the author of the celebrated AARON program—the first computer program in human history to paint original art—an ongoing research effort in autonomous machine intelligence, which began when he was a visiting scholar at Stanford University’s Artificial Intelligence Lab in 1973. In more than two decades, AARON has produced many thousands of drawings and paintings.

This exhibition will showcase the latest developments in Cohen’s research, and will present several stunningly colored, large-scale prints and a digital projection of AARON’s continually changing palette and composition.

Harold Cohen is made possible, in part, through major grant support from The James Irvine Foundation, The Institute of Museum and Library Services, the City of San Diego Commission for Arts and Culture, and the County of San Diego Community Enhancement Program. Generous support is also provided by MCASD’s Annual Fund donors.

Founded in 1941, the Museum of Contemporary Art San Diego (MCASD) is the preeminent contemporary visual arts institution in San Diego County. The Museum’s collection includes more than 4,000 works of art created since 1950. In addition to presenting exhibitions by international contemporary artists, the Museum serves thousands of children and adults annually at its varied education programs, and offers a rich program of film, performance, and lectures. MCASD is a private, nonprofit organization, with 501c3 tax-exempt status; it is supported by generous contributions and grants from MCASD Members and other individuals, corporations, foundations, and government agencies.