The Traffic of Clouds

A large scale site-specific installation developed by Hackenbroich Architekten in collaboration with Jan Christensen. A logic of weaving and constant movement pervades both the built form and the wall painting. Wood boards form solid walls not through nails and bolts, but by the tension in the wood fibers as the boards are bent into shape. 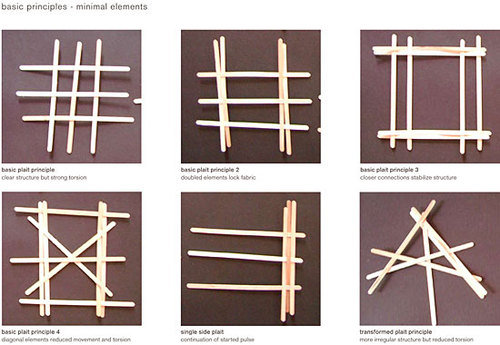 The Traffic of Clouds is a large scale site-specific installation developed by Hackenbroich Architekten in collaboration with Jan Christensen. A logic of weaving and constant movement pervades both the built form and the wall painting. Wood boards form solid walls not through nails and bolts, but by the tension in the wood fibers as the boards are bent into shape. As if casting the negative space between the structure onto the gallery wall, Jan Christensen’s wall painting deepens the space of the room – interweaving color into changing views afforded by the installation.

Through a large wooden construction that spreads between rooms and reaches towards the ceiling, the creators want to represent a new idea about how we use space – one that responds to the compounding media forces that characterize contemporary life. The large wooden structure disrupts and reconfigures the planning of PROGRAM’s functions: the installation will dissolve the boundaries between exhibition space and office, hybridizing the formerly separated gallery and office functions. Filling up the entire room, the structure’s role will also be blurred – at once an installation object, a walking surface, and a room. The structure will provide sitting areas and work surfaces. Those working in PROGRAM’s workspace are invited to use the structure as an office throughout the duration of the exhibition. Wi-Fi use will also be available for visitors during the exhibition hours.

Hackenbroich Architekten (www.hackenbroich.com) is led by Wilfried Hackenbroich and Rainer Mühr. The office focuses on developing and realizing new and innovative concepts and constructions in architecture. In doing so, they place a lot of emphasis on putting architecture in context – the context of function and the surrounding area, the context of the life of the user, as well as the cultural and social contexts. The analysis of these factors often leads to surprising solutions, fulfilling the needs of the client in an innovative way. The goal is to create buildings in which architecture, design and new technologies are organized into one concept. An important aspect of their practice is the teaching and research at various institutions including Bauhaus in Dessau and the Architectural Association in London. Their work has been published in numerous books and publications. Hackenbroich Architekten's engagement with new influences in architecture has led to numerous designs for cultural buildings in and outside Germany, projects for complex apartment buildings, as well as technically and spatially innovative installations and furniture.

The principal, Wilfried Hackenbroich, born in Cologne 1965, has studied architecture (graduated as Dipl.-Ing.) in Cologne, Germany and at the SciArc in Los Angeles (Master of Architecture), USA. His working experience ranges from internationally recognized offices like OMA (Rem Koolhaas) in Rotterdam or Morphosis in Los Angeles to regional offices in Cologne, London and Berlin. Besides the actual building experience as project manager for building volumes up to 20 million euro, OMA has offered insights into urban planning and large scale project planning.

The partner, Rainer Mühr, born 1974 in Potsdam, has studied architecture (graduated as Dipl. Ing) in Berlin, Germany. His working experience ranges from architectural design, building construction and site supervision as well as interface design, web design and media design (e.g. for the Deutsche Telekom and an established German car vendor). This range of expertise enables him to realise visionary and interdisciplinary architectural projects.