Advanced mature work. He has long sought to maintain a destabilized art practice rooted in the spontaneity and immediacy of graffiti culture and all informal forms of expressivity. His site-specific installation at Redcat will include a selection of existing works as well as a new sculptural/environmental construction. 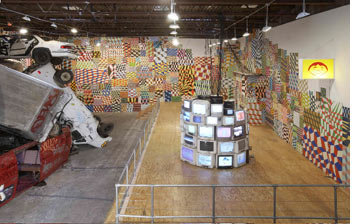 Barry McGee has long sought to maintain a destabilized art practice rooted in the spontaneity and immediacy of graffiti culture and all informal forms of expressivity. For McGee, graffiti is a vital communicative record of society, an extension of the desire for freedom, and the intellectual core his practice. It is pure expression in line with the values of American society. As he has explained: "The American Dream has nothing to do with criminality, but with a desire for independence and adventure, so escaping from any kind of control or definition also signifies not being identified, acting illegally, standing outside of every category of art and intervention on the streets."*

Amidst a profound history of sanctioned and unsanctioned public art, McGee and his cohort including Bill Daniels, Chris Johanson, Margaret Kilgallen, Alicia McCarthy, and Rigo 23 came to exact a significant impact on art practice the San Francisco Bay Area in the 1990s working on the streets and at the Luggage Store Gallery, Adobe Books, Clarion Alley and other formal and informal venues.

An avid looker, McGee is uniquely aware of the color, smell, and speed of his surroundings. Exposed to radical practices of activism, art, and performance in the Bay Area in the 1980s, McGee is part of a unique anti-establishment aesthetic that values social responsibility, nature, and McGee continues to test the limits of an uncontained practice, incorporating overturned vehicles, motorized objects, destroyed surfaces, flash movies, and hundreds of "tape" paintings.

McGee's site-specific installation at REDCAT will include a selection of existing works as well as a new sculptural/environmental construction. The exhibition is McGee's first solo exhibition in Los Angeles since his Hammer Project in 2000. It is the second exhibition McGee has worked on with former REDCAT director and curator Eungie Joo. The first was the 1998 exhibition, Regards, Barry McGee at Walker Art Center, Minneapolis.

This exhibition is made possible by the generous support of Jeffrey Deitch, Everloving and Feal Mor, RVCA, and Giant Robot..