'The Joy Is Not Mentioned'. The aim of this project is to revive and remix fragments of hip hop history into a series of hijacked dance events and blended radio frequencies. 'Among Us' presents the most recent work by six Lithuanian women artists from the generation now in its thirties. The exhibition compares and contrasts coincidences and divergences in the artists' practice, set against the broader panorama of contemporary art being produced internationally. 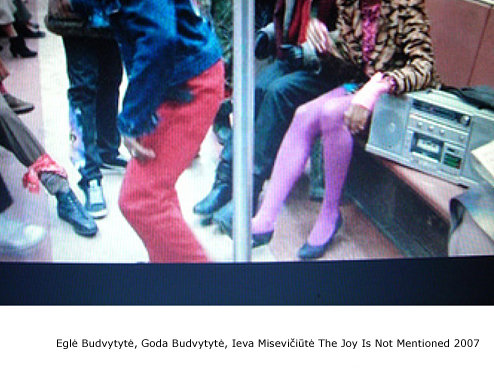 Among Us + The Joy Is Not Mentioned

Among Us presents the most recent work by six Lithuanian women artists from the generation now in its thirties: Jurgita Remeikytė, Alma Skersytė, Irma Stanaitytė, Laura Stasiulytė, Vilma Šileikienė and Kristina Inčiūraitė. The exhibition compares and contrasts coincidences and divergences in the artists’ practice, set against the broader panorama of contemporary art being produced internationally.

Since the late-1990s a higher number of women have been entering the field of contemporary art, in Lithuania, previously dominated by men (Evaldas Jansas, Dainius Liškevičius, Gintaras Makarevičius, Deimantas Narkevičius, Audrius Novickas Artūras Raila and many others). To some extent this is because men are now looking for more lucrative careers – leaving women more room in the cultural domain. Generally, this is part of a broader entrance of women into public life over the course of the last decade – including the fields of business and politics.

Many factors have contributed to this self-realizing emancipation, including: new modes of socialising beyond the imperatives of marriage and child-rearing (or, the patriarchal order); the rise of new types of work and a highly mobile job market; the preparedness of workers to adapt to new labour imperatives; and an increased international mobility (for work and leisure) exposes Lithuanians to different social values – all of which involves women in the ‘restoration of roles’ characteristic of post-industrial society.*

The exhibition’s title, Among Us, was inspired by a series of discussions between the participating artists that identified the exhibition’s salient and shared concerns; ‘our’ collective historical memory and the transformation of Lithuanian identity over the course of recent years.

The artists analyse visual codes that have come from the past and question whether they are still recognisable, if they are still being exploited or if they’ve already been forgotten? They study the influence of increasingly dynamic Lithuanian lifestyle on our identity, and the collective unconscious – presenting work that reflects upon personal experience and environment.

Irma Stanaitytė photographs interior furnishings collected by her father to reveal an understanding of beauty characteristic to Soviet times. His meticulously collected and arranged domestic ‘altars‘ of things index both the family‘s history and the spirit of their era.

Vilma Šileikienė works in her day-job the area of museum/heritage conservation and in her art practice reflects on issues related to it. In several series of photographs, the artist analyses her own relationship to museum exhibits as well as precious objects garnered from the personal collections of her friends.
Laura Stasiulytė’s video work in the exhibition immortalises the arrival of a cruise ship – a floating hotel or apartment block – at Klaipėda (Lithuania’s major port on the Baltic Sea). She also presents a series of photographs from the popular Realtors websites in which the owners of properties for sale accidentally appear in the shot. In her work Stasiulytė analyses the particularities of the changing economy and national identity, and the situation of the ‘little man’ caught in the shadow of the mechanics of representation.
Jurgita Remeikytė reflects upon the alteration of the status of the photographic image in the digital age both its proliferation and its downgrading as it has become instantly disposable (and no longer dependent upon the preciousness and availability of film). Remeikytė presents an photoinstallation and an object as comparison to analyse photography’s relationship to memory and duration/time and how the ontological impact of the digital process upon the photographer.

Kristina Inčiūraitė’s work in the exhibition reflects upon Lithuanian fashion and cinema from a historical perspective. She analyses points of view and potencies missed during the Soviet period and offers unique reinterpretations of the 1960s and 1970s in a series of photographs, a collection of clothes and a video, as well a period fabric pattern redeployed as a wall-painting.

Alma Skersytė remembers popular adhesive stickers she collected in her childhood. The characters from the stickers are projected as silhouettes in a darkened space, as personal icons of the Soviet era, perhaps as representative of soviet-Lithuania as the Simpsons are of today’s United States. The artist also studies a contested and contestable contemporary Lithuanian icon – the reconstructed Ducal Palace of Vilnius - by offering a cake in the shape of the palace for the consumption during the exhibition opening.

The exhibition is accompanied by a bi-lingual catalogue in six-volumes that handsomely records the works in the exhibition, and includes specific and contextual essays about the artists and their work. Each artist is commissioning editor of their volume and has invited a range of writers to record, interpret and review their practice from different cultural perspectives.

* "Work, family, and labor markets have been deeply transformed by the massive incorporation of women to paid labor, in most cases outside their home. The massive entry of women into the paid labor force is due, on the one hand, to the informationalization, networking, and globalization of the economy; on the other hand, to the gendered segmentation of the labor market taking advantage of specific social conditions of women to enhance productivity, management control, and ultimately profits”.
Manuel Castells The Power of Identity, p. 213

The Joy Is Not Mentioned

Radio broadcasts, a series of dance events in the city, and an exhibition at the Contemporary Art Centre: a project by Eglė Budvytytė, Goda Budvytytė and Ieva Misevičiūtė, part of the series of projects by young artists “Yellow Line” organized by the CAC Vilnius

Spontaneous dance floors in the city: between 8pm and 1am September 6-8, 2007
Getting the lowdown: follow information at http://www.vilniusburning.lt and www.cac.lt, tune in to “Užupio radijas” (94,9FM) during the nights of the event and “START FM” (94,2FM) during the exhibition
Exhibition: September 14—October 28 at the Contemporary Art Centre, Vokiečių str. 2, Vilnius
Exhibition opens at 6pm on September 14

A speculative projection of the missing 80s in a possible Vilnius present: The aim of this project is to revive and remix fragments of hip hop history into a series of hijacked dance events and blended radio frequencies.

Dick Fontaine’s documentary “Beat This! A Hip Hop History” serves as a guide for this sonic fact and fiction. In relation to history, the project is a de- and reconstruction held together by cut-and-paste and sampling techniques. Instead of trying to recreate events that could or could not have happened in Vilnius, the artists rely on free-floating imagination. This project/invitation creates an alternate timeline in the present that searches for new roles, new meanings, and new performers.

Radio, just like a city space and exhibition, is a machine for producing communities. The radio presenter, like the artist, does not know about the existence of listeners or the degree of their attention. But through radio the listener becomes a part of a world—real or imaginary. “Radio maker as a soundtrack composer, listener as private cinematographer/projectionist” (Bart Plantenga).

Dance is another place where the abstract ‘community making machines’ meet individual fantasy. The project brings to Vilnius one of the early forms of hip hop culture—the street dance. The intent is not to be faithful to the original, but to take up this musical moment’s spirit of invention in a new imagined way—fantasy invading the physical space of the city.

During three evenings, a special radio program will be broadcasted to dancers and passers-by through car radios and boom-boxes, and there will be launched spontaneous dance floors all over the city—in the parks, streets, parking lots, etc. Instead of being only the soundtrack for participants these programs will be an invitation for all to join and carriers of atmosphere. Radio waves will announce the locations of the events, friendly dance instructions and musical sounds ranging from electro hip hop or no wave to polka or Bollywood disco.

The exhibition that opens on the 14th of September will be a continuation of these events. A key part of the show are portable radio receivers that may be taken by visitors as guides or companions in the city. A catalogue of dance moves and city grooves is presented as printed matter but visitors are invited to add to it outside the boundaries of publication.