Secret for Snow Leopard. In this exhibition, Sone shows several of his exquisitely carved marble pieces: a recreation of the jungle, a maquette-like architectural landscape that includes snow-capped mountains, rivers and tropical plants, all within the same self-contained world; and some twenty crystal snowflakes. 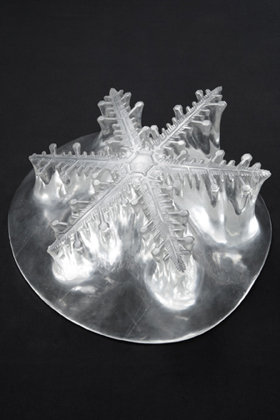 Parasol unit foundation for contemporary art is pleased to present Secret for Snow Leopard: Yutaka Sone, the first solo exhibition of Sone’s works in a UK institution. Sone's great love and fascination for nature, combined with a wholly open approach to life and art galvanizes a highly unconventional art. Working in various media, Sone makes installations, performance art, and films; he paints; and like a traditional sculptor carves hard marble and crystal. A common thread recognisable throughout Sone's work is his willingness to take risks and experiment, which at times can make some works appear to be unfinished or in a state of flux.

Sone's work is deeply influenced by his experiences, particularly those he has had during various expeditions in the Himalayas and in the jungle -- two very different environments which for him represent extremes of life. In his work Sone fuses art with life, his vision informed by their infinite possibilities and a genuine desire to give tangible form to that which is quintessential in all things. This constant seeking for perfection is evident in all of his work.

In this exhibition, Sone shows several of his exquisitely carved marble pieces, some of which have never been shown before; a recreation of the jungle, a maquette-like architectural landscape that includes snow-capped mountains, rivers and tropical plants, all within the same self-contained world; and some twenty crystal snowflakes.

Secret for Snow Leopard: Yutaka Sone is accompanied by the publication of a full-colour catalogue Parasol unit foundation for contemporary art is a non-profit space devoted to promoting contemporary art for the benefit of the public. Parasol unit is a privately funded charity with possible and future additional funding from the public and private sectors. The core activity of Parasol unit is to showcase the work of contemporary artists from around the world. Each year, the foundation mounts three or four exhibitions in various media, such as sculpture, painting, installation, video, or photography, for which some works might be specifically commissioned. Each exhibition is usually accompanied by a publication. Parasol unit does not charge admission fees.