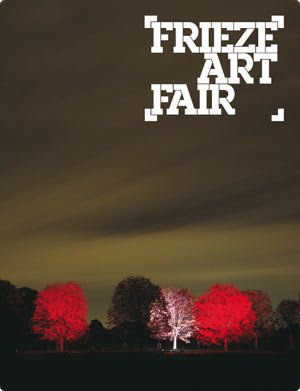 Highlights of Frieze Art Fair 2007
World’s top contemporary art galleries
151 of the world’s most exciting contemporary art galleries representing 28 countries will present new work by over 1,000 artists at Frieze Art Fair. The fair takes place in the beautiful setting of Regent’s Park in a large temporary structure of nearly 21,000 square metres, designed by renowned architect Jamie Fobert. Celebrating its fifth year, Frieze Art Fair has established itself as one of the world’s best known and most influential art fairs. Gallery stand highlights in 2007 will include Rob Pruitt’s Flea Market at Gavin Brown’s enterprise, a solo show by Pawel Althamer at Foksal Gallery Foundation, solo shows which change daily at Tanya Bonakdar Gallery, and an exhibition curated by Aurélie Voltz at The Fair Gallery – a new collaborative concept presented at an art fair for the first time. The not-for-profit spaces presenting at Frieze Art Fair 2007 are KHOJ from New Delhi and L’appartment 22 from Rabat.

Frieze Projects
Richard Prince, presents a stunning installation as part of the fair’s unique curatorial programme. Acclaimed as one of the greatest living American artists, Prince’s commission centres around a 1970s Dodge Challenger car. Artists Lara Favaretto, Elín Hansdóttir, Janice Kerbel, Kris Martin and Gianni Motti have also been commissioned to produce site-specific works in response to the unique conditions of the fair.

Frieze Talks
Frieze Talks maintains its reputation for bringing some of the most influential art commentators and practitioners from around the world to Frieze Art Fair; Dave Hickey, Roni Horn and Thierry de Duve are all part of this year’s programme.

The Award
Mario Garcia Torres is the 2007 recipient of this major award. His new commission for the fair will be presented in the form of a keynote speech by Allen Smithee. Frieze Projects is presented in association with Cartier.

Frieze Film
Frieze Film presents four short film commissions from some of the most exciting and challenging international artists working today: Oliver Payne and Nick Relph, Wilhelm Sasnal, David Shrigley and Kara Walker. Each film will be premiered in the on-site auditorium at Frieze Art Fair and broadcast daily on Channel 4 television in the prime time 3 Minute Wonder slots during the week of the fair. Frieze Film is sponsored by BMW, supported by Channel 4 and Arts & Business.

Sculpture Park
The Sculpture Park at Frieze Art Fair will present 9 sculptures including a collaboration by leading artists Claes Oldenburg and Coosje van Bruggen and three life-size bronze statues by Christian Jankowski. The Sculpture Park, in the English Gardens two minutes walk from the fair’s entrance, is accessible to all and no ticket to the fair is required.

Frieze Music
Frieze Music will present a performance of Glenn Branca’s epic Symphony No.13: Hallucination City for 100 electric guitars. The performance, directed by Glenn Branca, will bring together 100 guitarists who have never played together before at London’s Roundhouse on Friday 12 October.