Patrick Hall presents his metaphysical ink and watercolour works on paper and nude charcoal drawings. Although varied in style and subject matter, all reflect Hall's lifelong interest in human experience. Three is an exhibition by three artists from the IMMA Collection: Maria Simonds-Gooding, Charles Brady and Callum Innes. It features works across some 30 years, juxtaposing works in a variety of media, yet united by a shared sensibility. 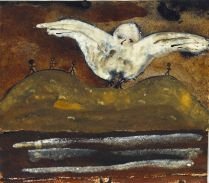 An exhibition of 90 drawings by the leading Irish artist Patrick Hall opens to the public at the Irish Museum of Modern Art on Wednesday 10 October 2007. Patrick Hall: Drawings focuses on works from the past 17 years and includes a series of recent drawings - some being shown for the first time - and a selection of new works direct from the artist's studio. The exhibition will be opened at 6.00pm on Tuesday 9 October by the Minister for Arts, Sport and Tourism, Mr Séamus Brennan, TD.

The exhibition comprises ink, pastel and watercolour works on paper and nude life drawings in charcoal. Although varied in style and subject matter, all reflect Hall's lifelong interest in human experience, suggesting a quest for meaning and happiness, fuelled by the twin sources of energy behind his work - mysticism and sexuality. Hall has described his works as being intensely private, "all about my own journey". Exodus I, 2004, for example, was inspired by Hall's identification with the themes of expulsion and journey in the Biblical account of the departure of the Israelites from Egypt. His affinity with the paintings of Caspar David Friedrich is a further expression of the sense of otherness which imbues much of his work. He sees Friedrich's depiction of his lonely figures in isolated landscapes as representing, not a forbidding desolation, but rather a very human one.

A series of male nude charcoal drawings, being shown for the first time, echo these feelings. In an interview with IMMA's Karen Sweeney in the exhibition catalogue, Hall describes the keen sense of aloneness he finds in the male nude: "This sense of aloneness appeals to me aesthetically. Even if I do a 'bad' drawing, if I get that sense of aloneness in the drawing, that's what I'm captivated by - that's what I aim for". The artist sees the smaller scale of his drawings as part of their emotional charge and also as a welcome artistic discipline. He describes the process of drawing as a "way of memorizing form and exercising the intelligence and the memory of the hand. You're just trying to capture a feeling and be as accurate as possible. It's the actual presence of the model I try to get, that sad aspect of his being which I try to express".

Patrick Hall is, of course, best know as a painter, and several works on paper in the exhibition, such as Children in the Forest and A Child in the Forest, both 2007, and Approaching the Yellow Mountain and Yellow Mountain, derive from his 2007 painting In the Vicinity of the Yellow Mountain, developed from a dream about a journey to a mysterious mountain. In order to provide a wider context, a group of other - quasi-Expressionistic - works on paper from 1990 to 1993 is also included, among them Moment of Truth, 1990, Red Nude, 1992, and The Sponge of Gall, 1993. A further selection of male nudes from 1997, which has been exhibited before, is also being shown.

Born in Co Tipperary in 1935, Patrick Hall studied at the Chelsea School of Art and then at the Central School of Art in London, where he was taught by the British artist Cecil Collins, whose influence has been a lasting presence in his work. In 1966 he moved to Spain, returning to live in Dublin in 1974. His work is widely regarded as fundamental to the so-called return to painting in this country in the 1970s and '80s. He has been an influential figure in the careers of many younger generation artists, including William McKeown, Nick Miller and Isabel Nolan. Patrick Hall has exhibited widely both in Ireland and internationally. Solo exhibitions include the Douglas Hyde Gallery, Dublin, 1995; Butler Gallery, Kilkenny, 2002; Green on Red Gallery, Dublin, 2004, and the Model Arts and Niland Gallery, Sligo, 2006. His works are included in many private and public collections including the Arts Council of Ireland, Dublin City Gallery: The Hugh Lane and the IMMA Collection. He was appointed a member of Aosdána in 1982 and currently lives and works in Sligo and Dublin.

Three: An exhibition by three artists from the IMMA Collection

An exhibition of works by three leading artists from the IMMA Collection, Maria Simonds-Gooding, Charles Brady and Callum Innes, opens to the public at the Irish Museum of Modern Art on Wednesday 10 October 2007. Three is the first in a new strand of programming that presents three artists in solo displays from IMMA's Collection. The exhibition features works across some 30 years from three different generations of artists of varying nationality, juxtaposing works in a variety of media, yet united by a shared sensibility. The intention is to offer an extended experience of each artist's work and process on its own terms, but with the potential for that experience to be made more meaningful by the proximity of the other two displays. The exhibition will be opened at 6.00pm on Tuesday 9 October by the Minister for Arts, Sport and Tourism, Mr Séamus Brennan, TD.

Three reflects the diversity and richness of IMMA's Collection, presenting a range of work by living artists at various points in their career as well as marking the unique expression of one of Ireland's most respected painters, the late Charles Brady. The physical frame for the exhibition is the architectural setting of the three adjoining spaces of the Gordon Lambert Galleries. The conceptual frame is the consideration of each artist's work and process through works in IMMA's Collection together with works drawn from the artists themselves or other collections. Each space focuses on an individual artist, yet is open enough to allow for a flow of readings and comparisons between each artist with possible, and maybe unexpected parallels, and encounters between works emerging. Installed in this way, the exhibition allows each artists work to be observed over a period of time in an intimate enviroment with a new perspective.

New York-born artist Charles Brady (1926-1997) settled in Ireland in 1959. He is widely recognised as a painter of insignificant, even banal objects, which he treated with monumental grandeur and dignity, combining a spare, almost minimal aesthetic with an open, painterly approach. Everyday objects such as an open matchbox, a bus ticket or an eyedrop box, float in a distorted perspective. Sparely rendered they are imbued with a sense of the mystical. Forced by poverty to paint on small pieces of cardboard, the artist retained this intimacy of scale throughout his life. White Shoe Box, 1987, is typically understated, presented on a modest scale that belies the sense of potential and mystery that it contains. Although his works remained figurative they retain the detachment of abstraction. The display of Brady's works from IMMA's Collection is greatly enhanced by the generous loan to IMMA of eight of Brady's paintings by the National Gallery of Ireland.

Born in India in 1939, Maria Simonds-Gooding has lived in Kerry since 1947. Since the 1970s she has worked principally with plaster and fresco pigment to create highly schematic works which reference man's relationship with the land. The works in this exhibition range across her career from the 1970s onwards and show a continuation in style which finds its latest expression in her current work, a highly rigourous and aesthetically sophisticated handling of brushed stainless steel and plaster, combining her control of plaster as a material with a love of metal developed over 30 years as an etcher and printmaker. In the work Up The Mountain, 1995, Simonds-Gooding fascination with the landscape is evident. Light is an intrinsic element in all her work in the way it reflects off the materials surfaces and also in the way it renders the shadows of incisions and irregularities as a form of drawing.

Scottish artist Callum Innes was born in 1962. His paintings emerge not only from the application of paint but from its removal with washes of turpentine which results in meditative, highly atmospheric abstract works. Innes approach is critially dependent on time, the crucial moment when the whole surface starts to move and flow as turpentine 'unpaints' the canvas rendering veils and streams of disembodied pigment. It is his manipulation of that moment which gives his works their complex character. Each painting is a result of unique but irreversible action, which if unsuccessful is destroyed. Innes works alternately in varying series which he revisits, the paintings in this exhibition are from the Exposed Paintings series. Exposed Painting, Charcoal Grey / Yellow Oxide / Asphalt, 1999, has a quite meditative quality which slows down the viewer's response and demands a closer, more contemplative look.

The exhibition is curated by Christina Kennedy, Senior Curator: Head of Collections, IMMA.

Lecture: Three Artists in Proximity
On Sunday 14 October at 1.00pm, Christina Kennedy presents a lecture about the work of Maria Simonds-Gooding, Charles Brady and Callum Innes, in the Lecture Room at IMMA. Admission is free but booking is essential on Tel: +353 1 612 9948; Email: talksandlectures@imma.ie