Taste of the Modern

Rothko, Rauschenberg, Oldenburg, Kline. As part of a special loan from the Museum of Contemporary Art, Los Angeles, six important works by four major American artists of the 1950s and 1960s will be on view, showcasing America's creative energies in Abstract Expressionism and Pop Art. Curated by Anne Schroder. 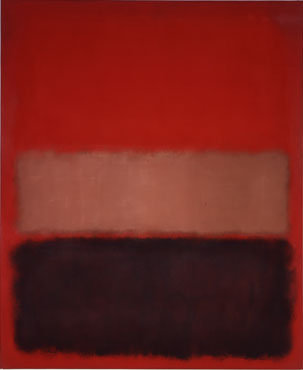 Six important works of the later 1950s and early 1960s will be on view for one year at the Nasher Museum of Art at Duke University, on special loan from the Museum of Contemporary Art, Los Angeles. The show opens Oct. 11. “Tastes of the Modern: Rothko, Rauschenberg, Oldenburg, Kline” includes significant examples of post-World War II modern art by four major American artists. Included are an “abstract sublime” painting by Mark Rothko, two paintings by Robert Rauschenberg, two sculptures by Claes Oldenburg and a gestural “action painting” by Franz Kline.

“I am pleased to bring these six seminal works to Durham,” said Kimerly Rorschach, the Mary D.B.T. and James H. Semans Director of the Nasher Museum. “These are significant examples of abstract expressionism and pop art created during one of the most revolutionary decades of American art, when the United States was becoming an international leader in the modern art world.”

The six works are part of the Panza Collection at the Museum of Contemporary Art, Los Angeles, acquired from Count Giuseppe Panza and his wife Giovanna in 1984. The Milan-based Panzas were among the first Europeans to collect contemporary American art, starting their collection in 1956. When their collection of more than 100 works was acquired by the Museum of Contemporary Art, Los Angeles, it was described as one of the world’s most important museum acquisitions of modern and contemporary art.

Rothko’s 1957 painting “No. 46 [Black, Ochre, Red Over Red]” exemplifies his expression of pure emotion through color and abstraction with luminous, floating blurred rectangles of vibrant colors suspended against a colored ground. Rothko, who died in 1970, was one of the major figures of the New York School of Abstract Expressionists, highly influential for subsequent generations of American painters. Kline, who died in 1962, was another important member of the Abstract Expressionist group. He was best known for his large canvases with broadly gestural strokes of black paint -- “action paintings” -- for which he often used utilitarian housepaint brushes. Kline’s 1957 work “Hazelton,” is named for a town in the coal mining region of Pennsylvania; it is one of several paintings that Kline named after cities.

Rauschenberg began producing sculptural assemblages of ordinary objects, which he called “combines” in reference to their combinations of “junk” items and gestural brushwork, around 1954. “Slow Fall” explores simultaneous actions of climbing and falling, implying aspiration and struggle. The feathered bird wing in “Painting with Grey Wing” (1958) was recently described by art historian and critic Tom Crow as suggesting “the soaring flight of youthful aspiration.”

Oldenburg, who was born in Sweden, drew inspiration from the streets of New York, with its shop window displays and commercial advertisements. Oldenburg began producing painted plaster reproductions of everyday objects and commodities, such as “Hamburger with Pickle and Olive” (1960) and “Pie à la Mode” (1962). Both works are made of plastered muslin over wire frames, painted with enamel paints. Oldenburg’s later oversized sculptures of foods and household objects (such as “Typewriter Eraser” previously on view at the Nasher) have a slicker, more manufactured look.