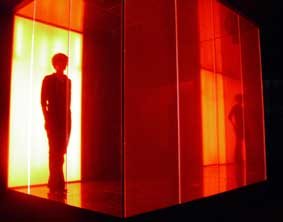 Faisal Abdu’Allah’s major new installation, Goldfinger that continues the artist’s recurring interest in reconfiguring representations of masculinity, criminality and the nature of power. Beyond the surface façade of violence, Abdu’Allah utilises the interplay between materiality and alchemy to invoke the transformative.

Taking the tradition of portraiture as his departure, Abdu’Allah subverts conventional discourses of myth and iconography to illuminate the universal and humane. The transcendental qualities of precious metal and essentially - light are used to explore a correlation between liminal spaces and spirituality.

Goldfinger was developed via a four-year dialogue with legendary underworld figure and head of the ‘Firm,’ Joey Pyle [1935-2007]. Abdu’Allah’s investigation and negotiations into Pyle’s ‘criminal elite’ and the networks forged by unity, loyalty and the bonds of interlinking relationships evolves from the artist’s constant redefinition of collaborative, socially and politically engaged practice and the terms by which they operate.

The exhibition evokes the fragility of representation and tenuousness of existence itself.

Biography
Faisal Abdu’Allah graduated from the RCA in 1993 and with his debut exhibition, I Wanna Kill Sam Because He Ain’t My Mother Fucking Uncle, quickly established himself as an artist interested in confrontation and displacement, using the gallery space as a site to explore rare social interactions through provocative installation pieces. Faisal Abdu’Allah’s work primarily evolves from photography, the printed image and lens-based installations.

Abdu’Allah is a senior lecturer in Fine Art at the University of East London.

He lives and maintains a studio in London.

Goldfinger has been curated by Indie Choudhury in collaboration with Cafe Gallery Projects London.