Contemporary Japanese Fashion from the Kyoto Costume Institute. The first major exhibition to combine the collective talents of leading Japanese fashion designers with new work by Hiroshi Sugimoto, one of today's most compelling artists. 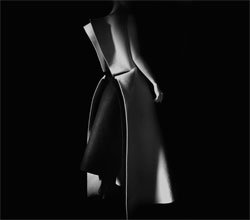 From October 12, 2007, through January 6, 2008, the Asian Art Museum will present Stylized Sculpture: Contemporary Japanese Fashion from the Kyoto Costume Institute, the first major exhibition to combine the collective talents of leading Japanese fashion designers with new work by Hiroshi Sugimoto, one of today’s most compelling artists. This special exhibition—conceived by Sugimoto—spotlights the extraordinary sculptural quality of contemporary Japanese fashion through 21 seminal masterworks by Issey Miyake, Rei Kawakubo, Yohji Yamamoto, Junya Watanabe, and Tao Kurihara. The presentation will also feature four new, large-scale photographs by Sugimoto—never-before-seen pieces from a forthcoming body of work—which capture the garments’ shadows, lines, and fullness of form, alongside the innovative creations that inspired them. The garments—borrowed from the Kyoto Costume Institute, one of the world’s leading repositories of haute couture—date from 1983 to 2007, and include a range of materials and methods from various seasons. Co-curated by Kyoto Costume Institute chief curator Akiko Fukai, Sugimoto, and the Asian Art Museum. Stylized Sculpture will be on view exclusively at the Asian Art Museum.

In conceiving of Stylized Sculpture, Sugimoto states that he “looks at the human body and the man-made skins that envelop it as contemporary sculpture. Issey Miyake, Rei Kawakubo, Yohji Yamamoto, and other Japanese designers have defiantly challenged the elegance of European mainstream fashion, vastly expanding the very concept of this artificial skin … and they have incarnated these creations with textures, colors, and shapes worthy of definition as sculpture.” In an effort to respect, and not distract from, the sculptural aesthetic of the garments on view, the Asian Art Museum’s installation will be sleek and minimal, with careful lighting to heighten the effect of the shadows, as in Sugimoto’s photographs. The garments will be presented on mannequins alongside the photographs, in galleries uncluttered by wall text or object labels. A complimentary brochure will provide didactic information about the exhibition, the garments and the designers, and will include further examples of Sugimoto’s new photography not included in the exhibition.

In the early 1980s, Japanese designers Issey Miyake, Rei Kawakubo, and Yohji Yamamoto took Paris by storm with avant-garde styles that overturned traditional Western conceptions of chic. Informed in part, perhaps, by traditional forms of Japanese clothing such as the kimono, the designers produced radical garments with shapes and textures that didn’t necessarily respond to the contours of the human body. Though they work independently, Miyake, Kawakubo, and Yamamoto share an interest in integrating Japanese tradition and tailoring with contemporary ideologies and technologies, resulting in exaggerated, voluminous pieces made out of unexpected materials. The creations on view in Stylized Sculpture will reflect the broad aesthetic of Japanese fashion over the past twenty years, as well as pinpoint the features for which each designer is best known.

About the Kyoto Costume Institute

Founded in 1978, the Kyoto Costume Institute (KCI) is one of the world’s leading repositories of historical costumes and contemporary fashion with a collection of more than eleven thousand original works. Under the leadership of Chief Curator Akiko Fukai, who has been with the Institute since its inception, KCI has organized numerous critically acclaimed fashion exhibitions in Japan and throughout the world, including Ancien Regime and Japonism in Fashion, and generated important publications such as Fashion: A History from the Eighteenth to the Twentieth Century; Collection of the Kyoto Costume Institute (Taschen, 2002). In recent years, the Institute has placed greater emphasis on Japanese contemporary fashion and its position within the global context.

Born in Tokyo in 1948, Hiroshi Sugimoto, best known for his photographic series of ethereal seascapes, dioramas, empty movie theaters and wax museums, has recently turned his attention to contemporary Japanese fashion, with a stunning new series of black-and-white photographs that highlight the sculptural, almost architectural, formations from Japan’s fashion pioneers.

About the Asian Art Museum
The Asian Art Museum is a public institution whose mission is to lead a diverse global audience in discovering the unique material, aesthetic, and intellectual achievements of Asian art and culture. Holding nearly 17,000 Asian art treasures spanning 6,000 years of history, the museum is one of the largest museums in the Western world devoted exclusively to Asian art. Once located in Golden Gate Park, the museum now resides at its new, expanded facility at Civic Center Plaza. An architectural gem featuring a dynamic blend of beaux arts and modern design elements, the museum’s new home is the result of a dramatic transformation of San Francisco’s former main library building by renowned architect Gae Aulenti (designer of Paris’s Musée d’Orsay) into a showcase for the museum’s acclaimed collection and exhibitions.