Janus - The Double Face of Photography 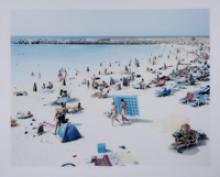 Recent decades have witnessed a great transformation in the field of photography as an artistic practice. Ever since conceptual artists began using photography in the sixties to document, record or as a participatory element in their projects, actions and performances, this medium began to alter the meaning imposed by the discipline of photography itself, shaking free of formal chains and taking off in new directions. In the last fifteen years, its use by numerous artists who do not claim to be photographers but rather use the medium to construct and develop a plastic syntax in which different ways of critically assessing reality circulate has given photography a renewed vitality. The appearance of Cibachrome in the mid-1960s, which introduced hitherto unknown sizes and colour qualities, and the recent transition from analogue to digital photography have opened the door to technical possibilities that are reminiscent of the dizzying series of experiments conducted between 1834 and 1851, the key period in the early days of photography.

This exhibition, consisting of works created in or after 1990 and selected from the museum’s collection, attempts to reflect not only the new paradigm that has emerged in contemporary art but also how it has gradually worked its way into the collection. Janus: The Double Face of Photography takes its name from the mythological Roman god who was represented by two faces looking in opposite directions, symbolising change and transition. The name of Janus has been used as a metaphor for the transformation of photography, arrayed in a series of dichotomies: analogue/ digital, negative/ positive, monochrome/ colour, reality/ fiction, creation/ manipulation and documentary/ artistic. The exhibition is divided into three thematic sections where the critical perspectives of the different artists converge: architecture, nature and people. A political dimension ties them together and connects with the viewing public.

Twenty-six of the participating artists are European, and the largest group consists of artists belonging to the so-called German New Photography school: Günther Förg, Frank Thiel, Candida Höfer, Thomas Ruff, Andreas Gursky and Axel Hütte. The last four were disciples of Bernd and Hilda Becher at the Düsseldorf Akademie, and although they have each developed a personal style, they are characterised by an unsentimental sensibility and an understanding of Germany’s 20th-century history. Their photographs are deliberately cold, architectures of great geometric formalism that symbolise power (institutional buildings, airports, luxury hotels, factories, libraries, etc.). A recurring theme hovers above their work: the construction of a nation and the creation of a city, specifically the city of Berlin. They were all witnesses to the “fall of the Berlin wall” and the German reunification. This section also includes the works of Spanish artists José María Mellado (Castillo urbano/ Urban Castle), José Manuel Ballester, who photographed the halls of this museum’s new wing while under construction, and Javier Vallhonrat, who plays with reality and fiction by photographing one of the great bridges of the Alps and subsequently creating a model of the scene with the scale inverted. The American artist Lynn Davis resorts to traditional practices in order to capture the ruins of the unfinished Meidum pyramid in the Egyptian desert. Dionisio González photographs the favelas or shantytowns of Sâo Paulo, the product of recycled materials and sheer human ingenuity, and then digitally overlays these images with contemporary architecture of his own design, imagining a viable solution that would maintain the horizontal layout and the feel of a working-class neighbourhood.

The landscape: power and progress

Burtynsky’s panoramic shots of nickel tailings, the quarry photographs of Aitor Ortiz, the black tide caused by the Prestige oil spill in Galicia captured by Allan Sekula and Jean-Marc Bustamante’s pictures of hewn trees against a marvellous Swiss landscape all speak directly of attacks on nature in the contemporary world. Rosemary Laing adopts a more subtle approach by placing a carpet of red flowers in the middle of an Australian tropical forest. The image is a reference to immigration and the taming of the virgin forest with this carpet – a replica of one owned by the artist’s grandmother, an immigrant from South Wales (Great Britain) who settled in New South Wales (Australia). Montserrat Soto, Sergio Belinchón and Ángel Marcos take on wide, open spaces, offering us the keys to understanding them from a socio-historical perspective. The works of Goldsworthy and Hamish Fulton, products of an evident commitment to nature, draw us closer to a conceptual poetry linked to the Land Art schools. The selected images by Axel Hütte, Nan Goldin and Ann Lislegaard show us pure landscapes, while Massimo Vitali offers panoramic scenes of crowds in public places, Marcos López provides a Buñuel-inspired look at “The Last Supper” in Sub-realismo criollo (Criollo Sub-Realism), Juan Pablo Ballester plays a perverse yet impeccably organised board game inside a man’s mouth and Gregory Crewdson constructs disturbing scenes that dissect the American middle class. However, all of them recreate a landscape in which we discover fragments of a story left unfinished.

People: the power within

This last section explores the psychological state and the human condition through a series of portraits. The tension and anxiety is palpable in Per Barclay’s images. Rosângela Rennó digitally recreates an impassive, superficial observation of anonymous characters to be classified and watched. The cold, distant beauty of the young girl photographed by Desiree Dolron contrasts with the strength and elegance of Pierre Gonnord’s portraits. The image that rounds out this group of portraits is Jean-Baptiste Huynh’s black-and-white photograph of a woman from Mali, sporting an open smile and the signs of a hard life on her ebony skin. She looks right at us but does not see us, because she is blind – a poetic paradox as the finishing touch to this exhibition.

Standing inside one of the large domed wood spaces of Andy Goldsworthy (Cheshire, England, 1956) can be an incredibly charged experience. There is something powerfully unnerving, both physically and emotionally, about first entering into these cavernous rooms. Constructed with tightly packed branches and tree trunks, which admit little or no daylight, the darkness can be disorientating, the eyes taking a short while to adjust. The wood can feel oppressive and heavy as it looms around and overhead. Built to be entirely self-supporting, or with a minimum of fixings, the seeming implausibility that these structures stand amplifies that initial frisson. And yet, there is also something distinctly comforting about the primal nature of these domes, induced at least in part by their light smell or their strange warmth. They offer an intense experience of interiority, which, beyond any initial hesitancy, can yield a real sense of reverie. Even a brief stay inside can re-attune our instinct for our natural material environment, which is so often dulled, mediated or sanitized.

Goldsworthy built his first large wood dome in 2005. Previously he had constructed smaller wood domes around large boulders or the base of trees, or simply as freestanding structures to enclose space. Typically Goldsworthy would build these structures mostly from the inside - the structure often becoming a cramped, tight fit as he negotiated its construction around a boulder for instance. These experiential conditions lie behind Goldsworthy’s desire to increase the scale of the domes to accommodate not one but several human occupants. That desire also derives from an early performance work that Goldsworthy undertook in 1983, for which he climbed into a small hole in the base of a Sycamore tree. The experience of ‘being in the stomach of the tree’ registered profoundly with him, and is one that he has sought to stage for the visitor. En las entrañas del árbol is Goldsworthy’s most ambitious wood dome project to date, and it develops the two dome spaces that he has built in London and Yorkshire insofar as it comprises three joined structures. Indeed, the shape of the wood structures follows the architecture of the Palacio de Cristal, which itself becomes a glass epidermis, a layer in the growth principle that radiates.

Andy Goldsworthy is British sculptor internationally known for his exclusive use of natural materials, such as wood, stone, leaves, clay, mud, snow and ice. These he typically uses at or near to the place where he finds them, subjecting them to forms and processes that reveal and heighten properties particular to them, their immediate context or their source. Perhaps best known for his sculptures and projects that are ephemeral, and even momentary in their existence, Goldsworthy has also produced a significant body of large permanent sited works, and has developed a broad range of temporary gallery-based installations, which frequently engage the ‘nature’ or material origins of buildings. En las entrañas del árbol has been built using Scots Pine from the forests in the mountains to the north of Madrid which supplies timber for a range of commercial products. Already harvested, Goldsworthy has ‘borrowed’ and temporarily diverted the wood stock from its commercial route. As Goldsworthy has suggested, ‘what is interesting for me is when you present a material in its raw state… there is a shock and a sense of discomfort…What you use in the city is nature too, and I hope that when I make a work in a building I make that association.