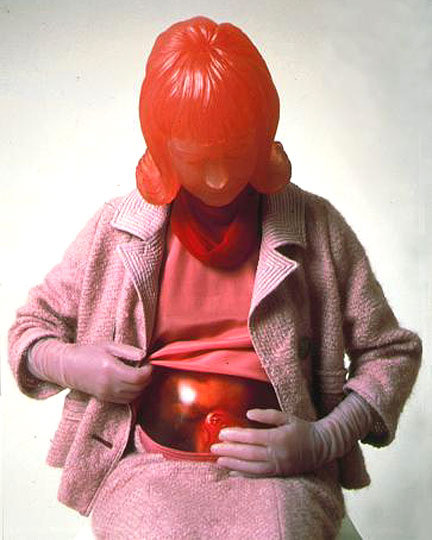 Exhibitionism: An Exhibition of Exhibitions of Works from the Marieluise Hessel Collection / Keith Edmier 1991-2007

Exhibitionism: An Exhibition of Exhibitions of Works from the Marieluise Hessel Collection

ANNANDALE-ON-HUDSON, N.Y.—This fall, the Hessel Museum of Art at the Center for Curatorial Studies, Bard College (CCS Bard Hessel Museum) presents Exhibitionism: An Exhibition of Exhibitions of Works from the Marieluise Hessel Collection. On view from Saturday, October 20, through Sunday, February 3, 2008, this new installation of the Hessel Collection, curated by White Columns director Matthew Higgs, presents a series of exhibitions in each of the 16 galleries in the newly inaugurated Hessel Museum.

Concurrently with Exhibitionism, the Center for Curatorial Studies presents Keith Edmier 1991–2007 in the CCS Galleries. The most comprehensive exhibition to date of work by American artist Keith Edmier, the exhibition explores the artist’s distinctive fusion of autobiography, popular culture, and collective consciousness in more than 40 works selected from key periods in Edmier’s oeuvre.

The opening reception for both exhibitions is from 1:00 to 5:00 p.m. on Saturday, October 20. (Limited free seating on a chartered bus is available to the opening from New York City.) On Sunday, October 21, guided tours of the exhibition at 2:00 p.m. are offered by Keith Edmier, Matthew Higgs, and Tom Eccles. Reservations are required for both the chartered bus and guided tours; call 845-758-7598 or e-mail ccs@bard.edu. All programs are open to the public without charge.

“Exhibitionism is, literally, an exhibition of exhibitions. Comprised of a series of 16 autonomous exhibitions and installations, Exhibitionism seeks to explore aspects of the labyrinthine connections, coincidences, discrepancies, and departures within Marieluise Hessel’s collection of contemporary art,” explains Higgs. “Assembled organically and intuitively over more than three decades, the Hessel Collection is fiercely idiosyncratic.”

Higgs notes that “Exhibitionism seeks to amplify this independent vision through individual exhibitions that variously consider: the social landscape; the poetics of space; language; semiotics; the grotesque; interiority and exteriority; and identity and rupture, among many other questions. Eschewing any attempt at an overview, Exhibitionism instead privileges multiple perspectives, and as such might be characterized as a sampler of thematic approaches to both the analysis and reinterpretation of a collection.”

Exhibitionism’s 16 exhibitions in the Hessel Museum are (1) “Jonathan Borofsky,” featuring Borofsky’s Green Space Painting with Chattering Man at 2,814,787; (2) “Andy Warhol and Matthew Higgs,” including Warhol’s portrait of Marieluise Hessel and a work by Higgs; (3) “Art as Idea,” with works by W. Imi Knoebel, Joseph Kosuth, and Allan McCollum; (4) “Rupture,” with works by John Bock, Saul Fletcher, Isa Genzken, Thomas Hirschhorn, Martin Kippenberger, and Karlheinz Weinberger; (5) “Robert Mapplethorpe and Judy Linn,” including 11 of the 70 Mapplethorpe works in the Hessel Collection along with Linn’s intimate portraits of Mapplethorpe;

(12) “1982,” including works by Carl Andre, Robert Longo, Robert Mangold, Robert Mapplethorpe, A. R. Penck, and Cindy Sherman, all of which were produced in close—chronological—proximity to one another; (13) “Monitor,” with works by Vito Acconci, Cheryl Donegan, Vlatka Horvat, Bruce Nauman, and Aïda Ruilova; (14) “Cindy Sherman,” includes 7 of the 25 works by Sherman in the Hessel Collection; (15) “Silence,” with works by Christian Marclay, Pieter Laurens Mol, and Lorna Simpson that demonstrate art’s persistent interest in and engagement with the paradoxical idea of “silence”; and (16) “Dan Flavin and Felix Gonzalez-Torres.”

Matthew Higgs is an artist, curator, and writer. He is currently the director and chief curator of White Columns, New York’s oldest alternative art space. Over the past 15 years he has organized more than150 exhibitions and projects in North America and Europe. A regular contributor to Artforum magazine, Higgs has contributed to recent publications for artists Kay Rosen, Ken Price, John McCracken, Oliver Payne and Nick Relph, Marilyn Minter, Elizabeth Peyton, and Peter Doig, among others. Recent exhibitions of his own work include solo exhibitions at Murray Guy, New York, and Jack Hanley Gallery, Los Angeles.

The Center for Curatorial Studies and Hessel Museum of Art

The Center for Curatorial Studies at Bard College (CCS Bard) is an exhibition and research center dedicated to the study of art and exhibition practices from the 1960s to the present day. The Center’s graduate program is specifically designed to deepen students’ understanding of the intellectual and practical tasks of curating exhibitions of contemporary art, particularly in the complex social and cultural situations of present-day arts institutions. With more than 9,500 square feet of gallery space and an extensive library and curatorial archive, CCS Bard offers students intellectual grounding and actual experience within a museum.

In November 2006, CCS Bard inaugurated the Hessel Museum of Art, a new 17,000-square-foot building for exhibitions curated from the Marieluise Hessel Collection of more than 1,700 contemporary works. The new museum features intimate rooms encircling two large central galleries, and is scaled so that approximately 10 to 15 percent of the collection can be shown at any one time. The Hessel Museum extends the reach of the CCS Bard exhibition program, providing a place to test out the possibilities for exhibition making using the remarkable resources of the collection as a whole.

This fall the most comprehensive exhibition to date of this celebrated American artist, Keith Edmier 1991–2007, is on view in the galleries of the Center for Curatorial Studies at Bard College, from Saturday, October 20, through Sunday, February 3, 2008. A highlight of the exhibition is the CCS commission Bremen Towne, a full-scale recreation of Edmier’s childhood home. “Edmier’s work is always at the edge of the acceptable boundaries of artistic virtues and taste,” writes curator Tom Eccles, CCS Bard executive director, in the book that accompanies the exhibition.

“Bremen Towne is a full-scale sculptural reproduction of the interior spaces from the ranch house where I grew up in the southwest Chicago suburb, Tinley Park. It is made to resemble what it would have looked like when I first moved there with my parents in 1971. Essentially, it is a brand new home,” explains Edmier. The installation “functions as a curated space. An exhibition of those things, which influenced my early aesthetic development, in the surroundings that helped shape who I am.” Bremen Towne is the largest physical manifestation of the artist’s fascination with reclaiming, or at least rethinking, the past through sculpture and installation. This extraordinary installation represents the culmination of Edmier’s psychological archeology.

Ranging from Edmier’s earliest works, such as I Met a Girl Who Sang the Blues (1991) through Bremen Towne, Keith Edmier: 1991-2007 presents a remarkable overview of Edmier’s work. It demonstrates not only the power of the artist’s use of his autobiographical landscape as a foil for considering a collective experience, but also his technical expertise as a sculptor. Many of Edmier’s works build upon and expose the intersections between his personal world and such American cultural touchstones as motorcycle stuntman Evel Knievel and 70s icon Farrah Fawcett, with whom he collaborated, as well as Janis Joplin and John Lennon. “Through the act of sculpture he voraciously pursues his memories,” writes curator Tom Eccles, citing both Jill Peters (1997), a “virginal portrait of his childhood sweetheart standing awkwardly in her sweater, skirt, and bobby socks” constructed in wax from a yearbook picture, and Beverly Edmier, 1967 (1998), a portrait of the artist’s mother, in which the yet-to-be-born artist is revealed through the stomach of his seated mother.

In conjunction with the exhibition, the Center for Curatorial Studies and Booth-Clibburn Editions, London, are very pleased to publish Keith Edmier 1991-2007, a new book exploring Edmier’s work in remarkable depth. Including essays by Tom Eccles, Douglas Fogle, and Caoimhin Mac Giolla Leith; a thorough guide to the source material for Edmier’s work by the artist’s longtime friend, Jade Dellinger; an interview with Keith Edmier by artist Matthew Barney; and a comprehensive bibliography, the book will be officially released at the opening reception of Keith Edmier 1991-2007 at CCS Bard on October 20.