The Robert Rauschenberg's exhibition presents 58 outstanding prints referring to the artist's integration of everyday objects and his use of representation at a time when abstraction dominated. While "The Baroque Woodcut" shows 80 prints and illustrated books among the most extraordinary woodcuts by Domenico Beccafumi, Giuseppe Scolari, and Jan Lievens. 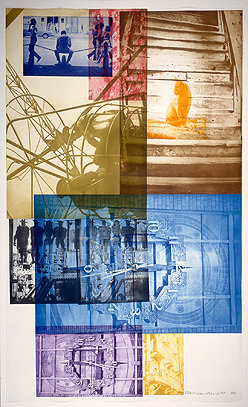 Let the World In: Prints by Robert Rauschenberg and The Baroque Woodcut

Washington, DC – Robert Rauschenberg’s boundless experimentation and his rich collaborations with talented printers will provide the focus for Let the World In: Prints by Robert Rauschenberg from the National Gallery of Art and Related Collections. The exhibition will present 58 outstanding prints, including some never before seen in a museum, on view at the National Gallery of Art, October 28, 2007, through March 30, 2008, in the Gallery’s West Building prints and drawings galleries.

“The National Gallery of Art is fortunate to have more than 400 prints by Robert Rauschenberg in its collection,” said Earl A. Powell III, director, National Gallery of Art. “This exhibition will feature the lithographs, screenprints, and intaglios of an artist who has sustained extraordinary creative powers across more than five decades and who has launched printmaking in new directions through his experiments in collaborative workshop environments.”

The exhibition takes its title from a statement made by the art historian Leo Steinberg, who wrote that Rauschenberg’s art “let the world in again,” referring to the artist’s integration of everyday objects and his use of representation at a time when abstraction dominated.

It will be arranged chronologically in five galleries, starting with Rauschenberg’s prints from the early 1960s and ending in the current decade. Works to be shown come from many generous donors to the Gallery and will be augmented by select promised gifts and loans.

Gifts on view from the artist and the print publisher Gemini G.E.L.—an important print workshop and publisher in Los Angeles—will include Source (Speculations) (1996), a fusion of disparate images such as a clothesline and Stonehenge, and Vamp (2000), which incorporates Rauschenberg’s photographic images of street life taken when he traveled to Marrakech in 1999. He was in Morocco to take photographs for his Gemini projects. The recent acquisition, Stunt Man II (1962) completes the series and will be on view with Stunt Man I (1962) and Stunt Man III (1962).

Booster (1967), a key work produced at Gemini G.E.L. features a six-foot-high x-ray image of Rauschenberg’s body. It was the largest hand-pulled, single-sheet print ever made at the time, challenging painting's dominance as a medium. Seemingly random images suffuse Booster, including a chair, an astronomical calendar, two drills, and a photograph of a man in the midst of a long jump—offering viewers an opportunity to bring their own interpretation to the work.

Examples from the vivid Soviet/American Array (1988) series will be on display, as well as Preview (1974) whose iconic images—two antique cars surrounding a Greek kouros—are printed on layers of gauzy fabric that shift with the slightest breeze, causing corresponding shifts in appearance. Two works from the artist’s Ruminations series will be included. 'topher (1999) and Big and Little Bullys (1999), are both gifts from the National Gallery Collectors Committee. These rich, tonal images present the artist and his family and reveal Rauschenberg at his most meditative.

On loan from Rauschenberg will be the first state of his seminal print Accident (1963), a work never before on view in a museum. In its final version, Rauschenberg printed from a lithographic stone that had accidentally broken, emphasizing creative forces beyond his control. Two prints and a working proof from the Bellini series (1987)—the two prints on loan from the artist and Patricia Alper-Cohn and David I. Cohn, and the working proof on loan from print workshop Universal Limited Arts Edition (ULAE)—reveal the artist’s integration of his own photographs with images appropriated from great works of art from the past. A selection of Rauschenberg’s Shirtboards (1991)—based on 1952 collages that used cardboard from shirts that he had laundered while he was traveling in Italy and Morocco—highlight the artist’s eagerness to experiment with whatever materials are available and of interest to him.

Rauschenberg (b. 1925) grew up in Port Arthur, Texas and received international attention starting in the 1950s when he expanded beyond abstract expressionism and minimalist monochromatic paintings. In works he called Combines, he fused everyday objects in a blend of painting and sculpture.

Beginning in the early 1960s, Rauschenberg created superb painterly prints filled with images he clipped from newspapers and magazines. As with the Combines, his prints brought representation and the commonplace into avant-garde practice. A water ring from a drinking glass, the face of a coin impressed onto paper, a traced outline from a cane, and the conscious inclusion of fingerprints all make reference to worldly objects and actions. Rauschenberg also branched out into new processes such as digital imaging as well as printing on unconventional papers, cardboard, fabric, and plastic.

In 1985, Rauschenberg traveled internationally to promote world peace and understanding through the vehicle of art. Calling his project the Rauschenberg Overseas Culture Interchange (ROCI), he visited and exhibited in Mexico, Chile, Venezuela, China, Tibet, Japan, Cuba, the Soviet Union, Berlin, and Malaysia. The culminating exhibition took place at the National Gallery of Art, Washington in 1991 as part of the Gallery’s 50th anniversary celebration.

Many credit Rauschenberg with bridging the gap between abstract expressionism and pop art. Today his work is included in virtually every important international collection of contemporary art.

The exhibition curator is Charles Ritchie, associate curator of modern prints and drawings. An exhibition brochure written by Ritchie will be available to visitors free of charge.

On Sunday, November 18, 2007, at 6:30 p.m., the red fish blue fish percussion ensemble will perform a complete and expanded version of Sanctuary by Roger Reynolds, composed especially for performance in the East Building Auditorium and ground-floor atrium. The National Gallery of Art is collaborating with the Contemporary Music Forum and the National Endowment for the Arts to make possible the creation and performance of Sanctuary, which is presented with support from the Randy Hostetler Living Room Fund of Washington, DC.

Fully Awake: Black Mountain College (2007), a documentary by Cathryn Davis and Neeley House, will be screened on December 23, 26, 27, and 28 at 1:00 p.m in the East Building Auditorium. The film features archival photographs and interviews, exploring the college's influential role in the development of American art of the twentieth century. Rauschenberg attended Black Mountain College in the late 1940s.

Gallery talks will be held December 9 at noon and 18 at 1 p.m. The Educators with Curators series explores the Rauschenberg exhibition on November 8, 13, and 15 at noon. All gallery talks start in the West Building Rotunda.

Washington, DC – The last flowering of the woodcut in its classic form will be revealed in The Baroque Woodcut, an exhibition of approximately 80 prints and illustrated books on view at the National Gallery of Art, October 28, 2007, through March 30, 2008, in the West Building prints and drawings galleries. Woodcuts achieved a final triumph in the baroque era when painters of outstanding caliber, such as Peter Paul Rubens and Guido Reni, chose it as a dramatic means for expressing the energy and refinement of their draftsmanship.

“This remarkable and intensely creative period contributed a magnificent and innovative chapter to the history of European printmaking,” said Earl A. Powell, director, National Gallery of Art. “The exhibition presents some of the most breathtaking examples of woodcut from this era.”

Among the most extraordinary of the woodcuts in the exhibition, those by Domenico Beccafumi, Giuseppe Scolari, and Jan Lievens, are all very likely conceived and executed by the artists themselves. However, most baroque woodcuts resulted from close collaboration between a painter and a master block cutter. The Flemish artist Peter Paul Rubens, for example, worked with Christoffel Jegher, and the Bolognese artist Guido Reni worked with Bartolomeo Coriolano. The best of these alliances were not always a matter of a fine craftsman faithfully executing an artist’s design, but just as often they reflected the joint realization of an aesthetic idea.

Woodcut is the earliest known method for replicating images on paper, and by the Renaissance it had reached an unparalleled degree of technical and aesthetic sophistication. The baroque woodcut developed a rich and diversified language of its own, demonstrated in examples ranging from intimate book illustration to elaborate narrative cycles and allegories and from single sheets to monumental friezes suited to mural decoration, all of which will be on display in this exhibition.

A woodcut is made by cutting a design in relief on the surface of a plank, a process that leaves a network of raised lines to be inked and printed with a press. This technique meant that the baroque preferences for painterly brushwork, lavish color, and subtle atmospheric tonality were all but impossible to recreate. Between 1580 and 1650, artists recognized the continuing potential of the woodcut as a vital artistic medium in its own right. Because woodcuts permit flexibility in scale and images can be reproduced quickly, the medium served as a highly effective way to disseminate works of art.

The exhibition is supported by a generous grant from the Thaw Charitable Trust. It has been organized by the National Gallery of Art, Washington.

The exhibition curator is Peter Parshall, head of the old master prints department. Parshall was also curator of the 2005 exhibition, Origins of European Printmaking: Fifteenth-Century Woodcuts and Their Public.