The Entrance to the Sanatorium. The artist investigates the sanatorium as architecture and mental space. The sanatorium was, and still is, a common experience for a generation of Swedes, born during the first decades of the last century. 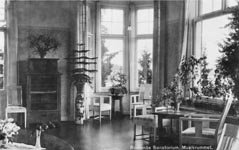 The Entrance to the Sanatorium

The Entrance to the Sanatorium, the title chosen by Ann Böttcher for her exhibition at Index, is also an image of exactly that, the entrance to a park surrounding a sanatorium. A path is leading through a gate, finding its way between the trees. It is the kind of entrance which suggest something more than its actual function, promising another existence, a place situated in a mythical outside, an exception.

The sanatorium was, and still is, a common experience for a generation of Swedes, born during the first decades of the last century. Poverty, bad housing conditions and a lack of effective medical treatment, made tuberculosis to a national disease until antibiotics were discovered and an adequate remedy suddenly became a possible reality. Prior to that a nutritious diet, resting and fresh air were the only available cure offered by medical service, and a large number of children and adults spent months and yearlong treatments at the sanatoriums that were built throughout the country, in secluded and forested locations. These places constituted isolated islands within society but were concurrently images of their time.

Ann Böttcher investigates the sanatorium as architecture and mental space. She positions its social and symbolic significance in relation to the advancements of modernity at the turn of last century when concepts like film, x-ray and psychoanalysis gave priority to movement and visibility, putting new demands on the individual. What earlier had been secluded and concealed within the body and soul now were opened up and exposed. In the area of architecture, borders between inside and outside were dissolved, the window becoming a wall of light. Within its frame the outside as well as the inside were on display, in a series of images for an eye in movement. The private became integrated in the public, extending society’s control over the individuals. The intensified mobility, with its new ways of communication and information, raised the velocity in society as a whole. The sanatorium offered another slower pace.

The exhibition presents a slide show based on research of the Swedish sanatorium as phenomenon and experience. Included in the show are also a room installation and a drawing, which uses the same environment as its starting points. Outside Index the artist have built an open air shelter, a for the sanatorium specific form of architecture with an open room where the patients could rest while breathing fresh air. The open air shelter represents a detail of the original’s more lengthy structure, however it is being built in a full scale and the gallery visitors are invited to use it.

In connection to the exhibition Index publishes a conversation between Ann Böttcher and Helena Holmberg, Index.

As a part of Ann Böttcher’s ongoing research and continuing working process, the artist has invited architect Catharina Gabrielsson for a conversation about aspects of modernity and architecture. The conversation will take place at Index on 28 November.