In the new Malmoâ€™s Center for Contemporary Art. Nothing presents the idea of nothing as a substantial artistic subject. In the midst of a flurry of debates about the mathematical history of zero, artists also have a history of exploring visual, playful and philosophical approaches to the void, invisibility, and absence. 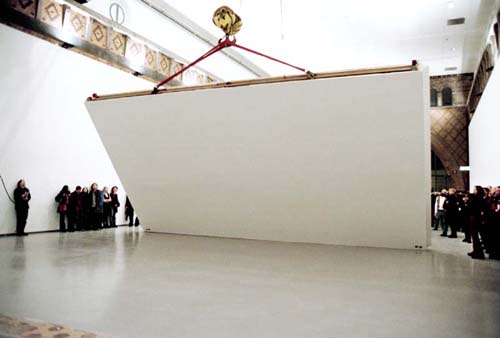 The new activities of MalmÃ¶â€™s Center for Contemporary Art

Nothing presents the idea of nothing as a substantial artistic subject. In the midst of a flurry of debates about the mathematical history of zero, artists also have a history of exploring visual, playful and philosophical approaches to the void, invisibility, and absence.

A major concern for artists in the 1960â€™s and 1970â€™s was questioning the idea of what we see before us. They examined the part that material qualities play in supplying evidence of an artwork that may exist purely in the imagination. Artists Robert Barry and Douglas Heubler made work that expanded the notion of sculptural space.

Creative processes are often about making something out of nothing or nothing out of something. Ceal Floyerâ€™s Garbage Bag, 1996, a bin liner placed in the corner of the gallery and Angela de la Cruzâ€™s Nothing (Blue),1998 a scrumpled up canvas, contrast relative values of the material and the idea. Matthew Crawley investigates ideas of nothing. His work A Film of me hiding in the bushes, 1996, which is just that, offers a playful incite into the faith of invisibility. By constructing a column in the gallery Gaia Alessi explores architectural invisibility and the value and description of empty space. In this way â€˜nothingâ€™ is a frame of reference and only exists if you are not looking for it. The phrase â€˜thereâ€™s nothing thereâ€™ is a value judgement.

The exhibition catalogue includes texts and images by 80 artists and writers. Published in collaboration with NGCA and August Media.

Nothing is supported by: Arts Council of England, British Council, City of Sunderland, Northern Gallery for Contemporary Arts

Johan Svensson in the Project Room

Johan Svensson lives in MalmÃ¶ and graduated from the Art Academy here in 2000. Since then, he has shown a series of exhibitions in Scandinavia and was awarded a three month studio grant at Suomenlinna in Finland. His show at the Rooseum continues the policy of encouraging emerging artists to produce new, ambitious work for our project room.

Johan Svensson works with sculptures, drawings and objects to tell narratives that are often allegorical or surrealist. His work can reference famous and infamous personalities, places, signs and events taken from history and contemporary debates. In his presentations the subjects are liberated from their original situation to create a world where new combinations emerge.

In the Rooseum Project Room, an enormous sugar landscape is scattered over the floor, covered with a swarm of nasty, deformed insects. Nailed to their hard little bodies are well known trademarks: McDonalds, VW, Marlboro, Nike, Toyota, Mercedes, BMW, Calvin Klein and Shell. The work becomes a creepy, slightly sickening vision of a version of our consumer paradise, parodied by an overabundance of sweetness.