An affordable 2-star hotel made by artist, contained within four walls of billboards, the hotel offers a modestly lavish and cozy interior including electricity, heat, and hot water. Reservations can be made through the website. 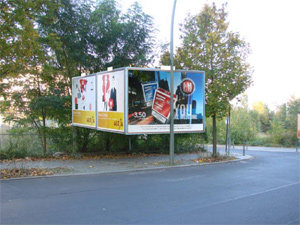 Skulpturenpark Berlin_Zentrum is pleased to announce the grand opening of The Single Room Hotel, an affordable 2-star hotel made by artist, Etienne Boulanger. Contained within four walls of billboards and public advertising, the hotel offers a modestly lavish and cozy interior including electricity, heat, and hot water. The hotel is centrally and uniquely located on the grounds of Skulpturenpark in Berlin-Mitte. For the sophisticated traveler and everyday adventurer, it is within walking distance of nearly all of Berlin’s most significant tourist attractions. The hotel will be open from November until March. Reservations can be made through the website provided below.

The Single Room Hotel sits on the corner of one of the few remaining blocks of vacant land in Mitte. Property fences and billboards are the only standing evidence of the land’s ownership and economy. Upon visiting Skulpturenpark, the hotel blends in with this landscape. From the outside, the hotel is a 1-story construction of billboards. Boulanger has leased the hotel’s façade to advertising companies. Consequently, the billboards provide not only the hotel’s architectural possibility but also its economic sustainability. With the added revenue, the hotel can offer affordable and competitive rates. Yet while the billboards serve their typical purpose to draw attention to themselves, they conversely offer an urban camouflage for the hotel and its guests to go unnoticed.

The Single Room Hotel evolved out of Boulanger’s previous work, plug-in, a series of investigations into Berlin’s urban and public architecture. From 2001-2003, he explored and inhabited unused, discreet, and obscure spaces throughout the city. In one instance, he domesticated a surprisingly big crawl space behind an advertising sign in the U-Bahn station. He later moved into an enclave in a bridge’s concrete foundation. The spaces often required subtle modifications, such as building a cardboard wall, in order to camouflage his infiltration. With The Single Room Hotel, Boulanger has now added a commercial twist. Collectively, the projects avoid a cliché utopian and alternative model to urbanization. Rather, they present practical and everyday strategies for maximizing public space, and provide a way to live within and without the system.