Studio Wall Drowings. An ongoing series of complex works on paper which record the artist's thought process and working practice. Tyson works in almost all mediums (form performance pieces to multifaceted sculptural installations) and has an interest in the way the world functions, our place in it as individual human beings and the interconnected-ness of every aspect of the universe. 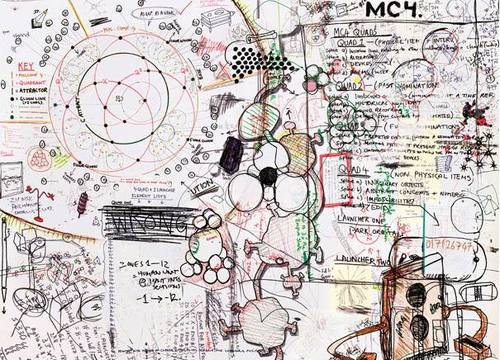 Keith Tyson (b 1969, England) has an interest in the way the
world works, our place in it as individual human beings and the interconnected-ness of every aspect of the universe. He works in almost all mediums, and his artworks have taken the form of performance pieces to multifaceted sculptural installations. His practice often begins with Studio Wall Drawings, however, which can be sketches of thought processes, workings for larger pieces or beautifully crafted renderings which capture the date and time when a certain idea formed on paper.

Haunch of Venison is delighted to present a ten year survey exhibition of Tyson's Studio Wall Drawings; an ongoing series of complex works on paper which record the artist's thought process and working practice. Of the works Tyson comments, "The Studio Wall Drawings exist in a space somewhere between a map, a poem, a diary and a painting."

In the late '90s, after years of working with machines and methods based on randomness Tyson began working on these drawings, which provided a more personal means of mapping out new ideas. Acting as large format notepads the subject of the works soon developed to include individual experiences and world events. The day oil prices reached $50, the birth of Tyson's first child, foot and mouth disease, and the artist's own conception are some of the moments recorded.

The exhibition will present a large selection of Studio Wall Drawings from the last ten years, giving an overview of the artist's most idiosyncratic working method. The exhibition will also be accompanied by a major new Haunch of Venison publication, Studio Wall Drawings 1997 - 2007, which will include an interview with the renowned art historian Beatrix Ruf and new text from critic Simon Grant.