An exhibition of contemporary Russian art and culture. It include works by the major players on the contemporary scene in Moscow and St. Petersburg as well as works by younger artists and artists whose works may have remained relatively unknown in the new rush to the art market. Curated by Julie Sylvester. 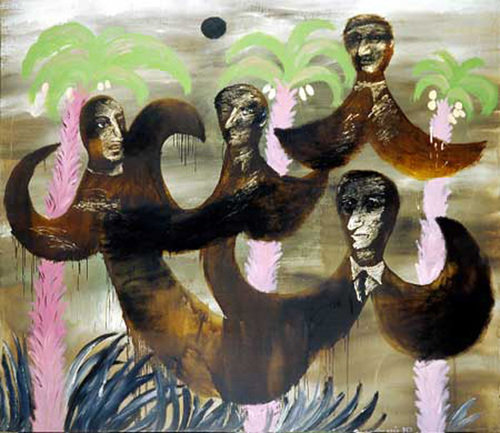 RUSSIA MIAMI 2007, an exhibition of contemporary Russian art and culture, will be on view in the Collins Building, 39 NE 39th Street, in the Miami Design District, from December 3-10, 2007. The exhibition is curated by Julie Sylvester, Associate Curator of Contemporary Art at the State Hermitage Museum, St. Petersburg, organized by RIGroup, in cooperation with HUGO BOSS, and supported by DACRA Development. The exhibition will be open daily from 12 noon-9 pm.

“RUSSIA Miami 2007 is inspired by the artists and the galleries who formed the foundation for contemporary art in Russia, “said Julie Sylvester. “The exhibition will include works by the major players on the contemporary scene in Moscow and St. Petersburg as well as works by younger artists and artists whose works may have remained relatively unknown in the new rush to the art market. The art selected for the exhibition is a purely Russian art, art made in the post Soviet era, influenced by a rapidly changing society, and in some cases, not represented by galleries.”

“The RIGroup is committed to the ongoing support of a cultural exchange between Russia and the United States to help foster tolerance and understanding,” said RIGroup CEO Janna Bullock. “Russia Miami 2007 is our second venture in Miami. Next summer we will present an exhibition of the finalists of the “Kandinsky Prize” for contemporary Russian Art in New York. In addition, we are planning exhibitions of contemporary American artists in Moscow.”

Aidan Salakhova co-founded the First Gallery in Moscow in 1989, the very first gallery committed to contemporary art in Russia. She is also an artist and will present a new installation work. Gennady Ustyugov was born in 1938 and although his earlier work is represented in Russian museums, he lives in relative obscurity in St. Petersburg. His collages which are autobiographical in nature and are made from spare household materials on old cardboard, may bring to mind works by Paul Mc Carthy, although he has surely never seen a western art magazine. Sergey Bugaev Africa is well known to the international art world, but a major installation of his work of recycled objects of the Soviet era has not been viewed outside of Europe. We will bring a large new work that incorporates early 20th century hand painted sleighs.

Oleg Golosiy (1965-1993) was a prolific painter who died before the age of 30, and his work is certainly unknown outside of Russia. As well, there are early works by Timur Novikov (1958-2002) including one early landscape painting, which may be a surprise to those familiar with his fabric works. Petr Denisenko began making art in mental hospitals where he was frequently treated in Soviet times for "commercial syndrome". His contribution is a robust, manic collection of drawings which have been made over the past few years in No Drawing No Cry, Martin Kippenberger's book of empty hotel stationery. The artists, therefore, are a varied lot and hail from different parts of vast Russia. Images of contemporary Russian life form an odyssey through the exhibition in a new series of photographs, made by Sergey Bratkov. Other artists in the exhibition are Nikolay Bakharev, Dmitry Bulnygin, Vladimir Dubosarsky & Alexander Vinogradov, Georgy Gurianov, Dmitry Gutov, Sergey Shekhovtsov (Porolon), Natasha Struchova, and Vasiliy Tsagalov.

Moscow based designer Denis Simachev has been invited to participate and will create new designs and products for RUSSIA Miami 2007. The 176 page catalogue, edited by Julie Sylvester, available at the exhibition, will richly represent the artists’ works and will include portraits and biographies. A short story, The Life and Adventures of Shed Number XII, by the acclaimed author Victor Pelevin is the text for the catalogue.

Many of the artists will be in Miami for the exhibition. We expect to have the exhibition become a meeting place, a Treffpunkt, point de recontre, for our visitors. We will make full use of the plaza area in front of the Collins Building, where we will always have water for our friends, contemporary Russian magazines, catalogues, and good conversation.