In the Context of Today's Contemporary Art. A retrospective focused on the phenomenal effect of his work on contemporary art and established Thek's historical significance, from legendary outsider to the founder and center of an art movement. More than 300 of Thek's works, which are largely in private ownership and therefore only seldom publicly shown. Also on show works by Martin Kippenberger, Jonathan Meese, John Miller, William Pope and many more. Curated by Roland Groenenboom, Gregor Jansen and Harald Falckenberg. 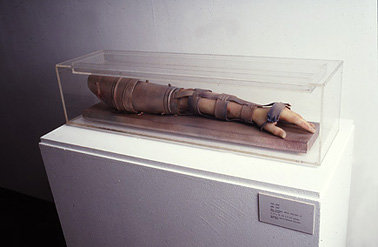 Paul Thek (1933–1988) is considered an artist with cult status. The hitherto most comprehensive retrospective of his oeuvre focused on the phenomenal effect of his work on contemporary art and established Thek's historical significance, from legendary outsider to the founder and center of an art movement. It has been possible to bring together more than 300 of Thek’s works, which are largely in private ownership and therefore only seldom publicly shown.

In their anti-heroic diversity and multimediality, and with their references to art, literature, and religion, his works (painting, photography, video, sculpture, and extensive environments) are among the central sources for the revolt and eruption of art in the 1960s. It is mainly for this reason that one of the early theoretical masterpieces of this epoch, Susan Sontag's »Against Interpretation« (1962), was dedicated to him.

The mold castings, also those of his own body parts, wax replicas of human tissue, hair, teeth, and bones in Plexiglas cases, which he produced between 1964 and 1967 as »Technological Reliquaries,« in their mixture of desire and repulsion, decay and pathos, held up the truth of the body to the world of commodities and the transfiguration of the everyday, as well as the idealization and dramatization of corporative minimal art. With this, Thek influenced not only contemporaries such as Vito Acconci and Bruce Nauman, but also present-day artists. His obsessive, often mystical content, which made him the founder of Abject Art and Environments, or Ensembles, was presented in a formal way that opened the path for the mixture of studio situation and total spatial design, of private and general icons, of profane and religious objects, of everyday and myth, of damaged objects to fragmentary piles of found materials, as was continued by artists from Anna Oppermann through to Thomas Hirschhorn.

Paul Thek is the epitome of an »artist's artist,« whose influence extends through to the most recent generation of artists. Our selection concentrates-with many exceptions and with no claim to being complete-on the works of younger artists who have a close relationship to Thek’s diverse oeuvre. Beginning from his approaches, their works appear as independent positions in the contemporary art world. Against this backdrop. Thek's work is looked at from a current perspective.
The works by Thek thereby also serve as a starting point for investigating the works of other artists represented in the exhibition.

Following exhibitions at the Stable Gallery in New York in 1964 and 1967, Thek quickly found recognition in Europe as an American in exile there, similar to the Lost Generation and Beat Generation before him. Inspired by the building style of Egyptian pyramids and European cathedrals, he attempted to create environments that, on the one hand, refer to blood and innards, meat and bones, that is, call up the aura of Christian relics. On the other hand, he foresaw the dismembering of the body into organs, that is, into bodies without organs and organs without bodies, in the era of medial and genetically engineered reproduction, as would later be formulated in the philosophy of Gilles Deleuze. Art and life blended in Thek's works, which he considered »works in progress,« made up of ephemeral objects, unstable materials, and installations of limited duration, and in which the bond between the natural, organic, and artificial technical world was retied. The exhibition will also be shown in the Phoenix Hall of the Sammlung Falckenberg in Hamburg (17 May-14 September 2008).

A monograph by Axel Heil will be published to accompany the exhibition, and also a comprehensive scientific publication edited by Harald Falckenberg and Peter Weibel in April 2008.