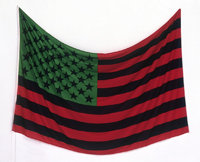 After critical and popular acclaim at Berlin's House of World Cultures, the Queens Museum of Art presents New York States of Mind, an exhibition and film program on view December 16, 2007 through March 23, 2008. New York States of Mind offers a fresh vision of New York City from an outsider's perspective while evoking nostalgia for the city's gritty past. New York City, the larger-than-life myth that envelops our everyday reality, is an urban hub where diverse communities seek refuge and flourish, a concrete jungle where only the strong survive, and a 24-hour space of limitless opportunity. Through an interdisciplinary exploration, New York States of Mind provides a corrective backdrop to this mythical New York while demonstrating how artists have engaged with the city as a democratic and experimental space.

"The selection of artworks and artists for this exhibition helps to define contemporary culture and the cultural understanding of makers based in New York, of how living in New York impacts on production, especially since the sixties," said curator Shaheen Merali. "The selection purposefully collates a series of works by artists from a diverse set of social, political, ethnic, and intergenerational spaces bound together only by the confined space that is the city of New York."

New York States of Mind is also a timely contribution to the transnational dialogue between the United States and Germany. The exhibition opens a month after Carnegie Hall’s first major international festival, Berlin in Lights: a celebration of artistic production in contemporary Berlin. Both Berlin in Lights and New York States of Mind have emerged as parallel collaborations between two of the world's most cosmopolitan locales. Queens Museum Director Tom Finkelpearl states, "Last year, we examined Robert Moses' vision for New York City. This season, New York-States of Mind presents a complete contrast which, combined with the curatorial vision of Shaheen Merali and 30 artists, conveys the messy vitality of the city."

The films in New York States of Mind range from early silent films documenting the rise of the world-famous Manhattan skyline in the 1920's to contemporary shorts, art films and feature documentaries. Collectively, these works portray New York City as a political, social and sexual sphere of interaction and evaluate how artistic production has been influenced by these dynamics. The film program corresponds to the themes Counter Cinema, Slow Motion and Trans-Borders and includes works by Abigail Child, Jem Cohen, Laura Cottingham, Mary Jordan, Sarah Morris, Jennifer Reeves and Michael Winterbottom.