Three rooms by three gallery artists who all have a sculptural practice with a conceptual chassis: Cornelia Parker, Massimo Bartolini, and Dario Robleto. 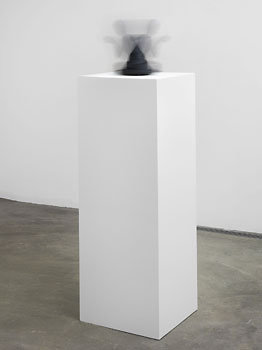 D’Amelio Terras is pleased to present three rooms by three gallery artists who all have a sculptural practice with a conceptual chassis — Cornelia Parker, Massimo Bartolini, and Dario Robleto.

Cornelia Parker
Cornelia Parker’s work often deals with deconstruction of monuments, be it people or places. The photographic works on view are from her series “Brontëan Abstracts” in which she examines the mythology surrounding the Brontë sisters – Anne, Charlotte and Emily. Parker uses an electron microscope to scan artifacts and objects owned by the Brontës such as a lock of hair, a quill pen, a needle. The magnification both abstracts them and reveals their essence. Other photographs focus on both the conscious and subconscious marks left by the sisters — such as ink blots on the lined paper, deletions from the original manuscripts and holes in the pincushion.

Dario Robleto
Dario Robleto, who uses hard to fathom materials to create his sculptures, utilizes ground vinyl dance-craze records, various medicinal botanicals and carved bone calcium to make his sculpture “Shaker Apothecary”. Along with this piece that directly references a traditional shaker cabinet, Robleto presents a large-scale drawing consisting of three panels that contain record covers constructed out of colored paper and cardboard. The invented record titles reference science, religion, and folk medicines as they relate to American pop culture. The two works together speak of the way music is tied to both the traditional remedies and religious rapture.

Massimo Bartolini
Bartolini's works are often experiential and have involved a wide variety of mediums such as sculpture, site-specific installation, performance photography and drawing. He will show a single work titled “Revolutionary Monk” — a bronze figure of a praying monk in a typical Bodhisattva position that is spinning so fast on its axis that it becomes almost invisible. Here the act of prayer is not only something that has a potential to bring about a revolutionary change but also becomes threatening and potentially destructive.