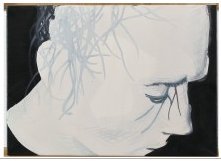 Wilhelm Sasnal’s painting is the product of impressions of different kinds that affect the artist not just through his sense of sight. His paintings are situated between a striving to explore reality and the need to interpret its various, often not popular contexts. They concentrate on the techniques of painting and through this also investigates the physiology of vision. They show from what elements a painting emerges, and in what conditions begins the process of seeing and the particular process of ‘becoming’ a painting. This process coincides with a further element that is just as important in the artist’s work: his highly original iconography (photographs, films, comics, music) that cause the world presented in his works to undergo a fragmentation into single events from the field of personal experiences or on the contrary of significant contexts from a “common history” or the space of a society in a particular place and time.

The title of the exhibition, “Years of Struggle”, is a citation from a propaganda film about General Karol Swierczewski, but is also the title of a painting with which the artist struggled for a long time. At the exhibition are presented paintings from the last few years, whose striking stylistic diversity, stretched between figuration and abstraction, takes up a game with a range of the conventions of modernism. In this selection of paintings can be seen the whole spectrum of the themes which are today of interest to the artist.

At the exhibition in Zacheta are shown paintings from the last few years, loaned from the artist’s studio and from collections in Poland and abroad. Their themes demonstrate the major contexts of Sasnal’s work, such as the merging of pre-war modernism with autobiographic elements (the series “Moscice” 2005), years of struggle and war (the series “Partisans” 2005, Kielce – Cracow, 2007), the holocaust (the series of paintings “Maus”, 2001, made on the basis of Art Spiegelman’s comic; “Shoah”, 2003 inspired by Claude Lanzmann’s film and paintings inspired by the prose of Tadeusz Borowski), and the various contexts of post-war life from the time of the Polish People’s Republic and most recent history depicted from a personal perspective. In the series of modernist churches from Tarnow or the portraits of priests (2006), Sasnal portrays the symbolic elements of contemporary Poland that currently dominate reality. At the exhibition will also be present ed numerous portraits and “music paintings” emerging from his fascination with music - portraits of musicians or the recording of the traces of dance (Joey Baron, 2002, Mosh pit, 2006). The exhibition will also present Sasnal’s films “Kodachrome” (2006) and “Concorde” (2003) about the withdrawal of the cult film or the cult plane, “Love Songs” (2005) and “Europa” (2007) inspired by image, texts and music: “Spring” (2006), The Ranch (2006/2007) and “Brasil” (2005) – chance documentation of confrontation with the police.

Wilhelm Sasnal was born in 1972 in Tarnow. From 1992–1994, he studied architecture at the Cracow Techinical University, and from 1994–1999, painting at the Academy of the Fine Arts. He was a co-founder of the no longer in existence Group Ladnie (1995–2001). He is linked to the Foksal Gallery Foundation in Warsaw. He lives and works in Cracow.

At the exhibition in Zachęta, we present paintings, sculptures and drawings by the most famous Polish artists working at the turn of the 19th and 20th centuries. These are artists whose names have been indelibly inscribed into the history of Polish art as synonymous with the major trends in modern art, such as postimpressionism, colourism or symbolism.

Alina Ślesińska is a great absence in the history of Polish contemporary art. Sometimes compared to the famous Alina Szapocznikow, like her she made her debut in the 1950’s, the time of Socrealism, and like her too she was drawn to figurative sculpture inspired by the oeuvre of Henry Moore.

This monographic exhibition of the artist’s work will also ask wider questions of the place of women in Polish contemporary art and about the specific role of this particular artist who, at the turn of the 50’s and 60’s enjoyed spectacular success in the West: first as a herald of changes through her taking up of the poetics of modernism beyond the Iron Curtain, and then from the beginning of the 60’s as an author of experimental “proposals for architecture” which dissolved the boundary between this discipline and sculpture.