In this solo exhibition Hatoum presents six sculptural works related to the sphere of intimacy (the artist's and the viewer's) that articulate an ongoing friction between the notions of home, security, warmth and their opposites. A range of works on paper: Clouds, Cut-outs and Rubbings complete the display. 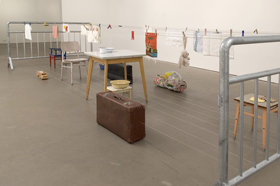 Chantal Crousel is pleased to announce an exhibition of recent and new works by Mona Hatoum. This much expected event will bridge a 13 year gap since her last solo exhibition in Paris (*). During this period, Mona Hatoum's work has been exhibited widely in Europe, the United States, Canada, Australia and Mexico. Her exhibition "The Entire World as a Foreign Land" was the inaugural exhibition for the launch of Tate Britain, London, in 2000. She has also participated in the 1995 Venice Biennale, the 1995 Istanbul Biennial, Documenta XI, 2002, the 2005 Venice Biennale and the 2006 Biennale of Sydney. In this exhibition Mona Hatoum presents six sculptural works related to the sphere of intimacy (the artist's and the viewer's) that articulate an ongoing friction between the notions of home, security, warmth and their opposites.

MOBILE HOME, 2005
A contained yet dramatic installation featuring a range of familiar domestic objects that are loaded with a rich memory of home and displacement. The "clotheslines" are strangely festive as they move above the homely elements gliding across the floor along barely perceptible wires via a pulley system, fixed between two parallel metal street barriers creating a closed space. A permanent threat of instability and insecurity is transmitted to the viewer in a fascinating yet destabilising interaction.

NATURE MORTE AUX GRENADES, 2006-2007
A sumptuous and quiet composition consisting of a variety of some sixty individually blow and hand crafted colourful crystal shapes are displayed on a steel rolling table.

BUKHARA (RED AND WHITE), 2007
This traditional handwoven Persian carpet with its geometric grid is one of the familiar objects Mona Hatoum remembers furnishing her childhood home. Plucked out of the pile of the carpet - as if moth eaten or eroded in some way, appear areas that resemble the map of the world using the Peters Projection that shows all the countries and continents in true proportion to each other. We encounter this pattern again in the cotton and abaca work on paper called PROJECTION, 2006.

KEFFIEH II, 2007
Emblematic of the Arab world, this scarf is embroidered in the traditional technique of metal thread and cannetille applied by hand on silk organza. This traditional technique is the same as that used to embroider the uniforms of the academicians as well as the military decorations of high ranking officers. This technique was introduced from Persia in the 12th Century. It was frequently used by the kings of France and the nobility to enrich their clothes and blazons.

MISBAH, 2006
Misbah is the Arabic word for lantern. This brass lantern, made in Cairo in the traditional way, is normally meant to enchant a domestic space with its poetic cut-out decorations, often in the shape of stars. In this case, Hatoum has added silhouettes of soldiers with their gun pointing forward. The lantern is equipped with a motor, thus creating a perpetual movement of a marching squad that is both fascinating and menacing.

JARDIN SUSPENDU (HANGING GARDEN), 2008
A wall made of sandbags similar to those used for checkpoints, border crossings, and proliferating in war zones all over the world. Their inhospitable surface can nevertheless become the ground for seeds brought by the wind that take root and flourish. A range of works on paper: "Clouds", "Cut-outs" and "Rubbings" complete this exhibition. Chantal Crousel thanks Martin Hurel and the Maison Hurel for their precious collaboration with the realisation of “Keffieh II”.