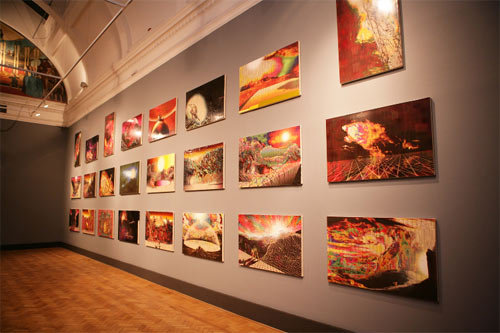 This biblical story covers the fall of the rebel angels into Hell, the temptation of Adam and Eve and their subsequent expulsion from paradise. Cheung sees this story as having a metaphorical relevance to the way we have entered the 21st century. The series of 24 works in the exhibition depict imaginary worlds on the brink of devastation reminiscent of a sci-fi landscapes in spray paint, Chinese ink and Financial Times stock listings.

Gordon Cheung said ‘I felt I could translate John Martin’s Paradise Lost series into a contemporary and relevant context. The idea that we are losing, or a certainly becoming increasingly urgent with, our relationship to Earth is compelling and to use an archetypal story as a means of understanding our current era attracted me a great deal.’

Born in 1975 in London, Cheung studied painting at Central Saint Martins College of Art and Design and the Royal College of Art (2001). In 2005 Cheung was the first British Born Chinese to have been selected for the British Art Show and achieved finalist status for the John Moores 24 Painting Prize and Decibel Award in 2006. He is also a prizewinner of the Jerwood Contemporary Painters 2008.

The exhibition will include a new print, be accompanied by a fully illustrated catalogue and coincides with displays of the artist's works at the Chinese Arts Centre in Manchester. ‘Paradise Lost’ was commissioned as part of the Laing Art Gallery Solo Award in 2006.

Notes to editors
1. Alan Cristea Gallery is the largest dealer and publisher of 20th-century and contemporary prints in Europe, publishing prints by the very best international artists as well as regularly showing paintings, works on paper, lightboxes and installations. This year the gallery expanded into additional space at is now at 31 Cork Street and new space at 34 Cork Street.
2. More information on Gordon Cheung is at gordoncheung.com