The exhibition features The Story of Edward Holmes (2007), a 15-minute video projection in which the artist uses modest materials and low-tech means to create the first in a series of animations that tell the story of his fictional protagonist. 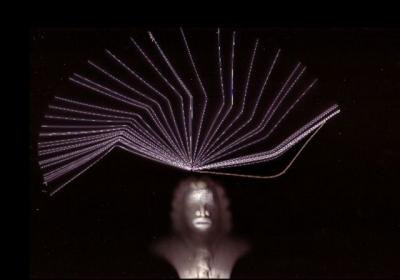 The exhibition features The Story of Edward Holmes (2007), a 15-minute video projection in which Hartung uses modest materials and low-tech means to create the first in a series of animations that tell the story of his fictional protagonist. Through a complex sequence of events that capture the chaotic escapades and psychological drama experienced by Edward Holmes, Hartung slyly comments on the nature of political and social conflict, and in particular, the western domination of indigenous cultures. Through the aid of an omniscient voiceover, The Story of Edward Holmes employs the perspective of the oppressor to give the effect of mock-authority. Yet, similar to other artists who use history as a form of social critique, meaning is not espoused but questioned, as is any sense that prevailing knowledge exists.

In Hartung’s work, what becomes immediately perceptible is a disproportionate sense of scale, most clearly visible in his videos but also his sculptures. These range from small to large-scale, and contain elements from aluminum foil and toy ships, to found objects and dollar-store knick-knacks that are used in creating the sets for his moving image works. Presented alongside The Story of Edward Holmes is Raw File Dump #2 (2007), which as the title suggests, straddles the line between source material and junk pile, either to be viewed as monuments or ruins to the implied narratives they create.

Mixing aspects of animation, cinema, classical literature, and video art’s own history as a relatively new medium in transcribing what amounts to an “age-old story”, Hartung’s raw assemblage of elements is evidenced throughout the exhibition and can be seen as an archeological pillage into contemporary society. Revealing the formal mechanisms of his work enables Hartung to ponder subjectivity precisely through the subject in question, as the construction of “Edward Holmes”, both as a character and a story, alludes to the illusory nature that any act of creation entails.

Like Hartung’s past work, The Story of Edward Holmes is contextualized through a formal viewing context, that at times comprise “viewing stations” incorporating projection screens and chairs, a setup that both enables and enforces active participation. Much like his sculpture, these framing devices bring Hartung’s imaginary contexts into real time, and incite a lived experience for viewers that also call larger social encounters into question.

Using visual cues and a faux historical presentation that collapse time and place, fact and fiction into a jumbling, hallucinatory narrative, Hartung exposes how the mechanics of moving image media function as a didactic device, thus providing the means for him to excavate the past, examine how we transcribe the present, and how this invariably casts doubt into the future.