Berthe Morisot was highly praised by critics for her relaxed brushstroke as the "most Impressionistic of the Impressionists." Mary Cassatt developed her unmistakable style in Paris and through her close contact with Degas. Eva Gonzales, a student of Manet, left behind an oeuvre of great quality though limited quantity as a result of her early death. Marie Bracquemond exhibited with the Impressionists but began to compete with the work of her husband, Felix Bracquemond, and ultimately abandoned painting. Curated by Ingrid Pfeiffer. 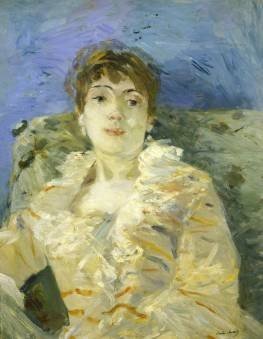 Everyone knows the names of famous Impressionists – Manet, Monet, Degas, Renoir, Pissarro – but it is less well known that important women painters also belonged to their circle. Berthe Morisot, a successful and admired colleague, close friend of and model for Manet, was highly praised by critics for her relaxed brushstroke as the “most Impressionistic of the Impressionists.” The American artist Mary Cassatt developed her unmistakable style in Paris and through her close contact with Degas. Eva Gonzalès, a student of Manet, left behind an oeuvre of great quality though limited quantity as a result of her early death. Marie Bracquemond exhibited with the Impressionists but began to compete with the work of her husband, Félix Bracquemond, and ultimately abandoned painting. The exhibition in the Schirn Kunsthalle includes some 150 works from numerous international museums and private collections and uses the example of these four women painters to present women artists’ contribution to the Impressionist movement. The exhibition “Women Impressionists” is sponsored exclusively by Morgan Stanley. Terra Foundation for American Art.

The four names serve as examples for the fact that considerably more women artists were active in that artistically and socio-politically turbulent epoch from about 1865 to 1895, producing highquality paintings, drawings, engravings, and sculptures, than described in traditional art history until recent years. Compared to other movements, Impressionism was particularly suited to accept also women within its ranks. Critics maintained that the paintings of all Impressionists were explicitly “feminine,” for example: both in their subjects – everyday scenes, mother-and-child representations, gardens, interiors, still lifes, etc. – and in their smaller formats oriented towards a new middle-class clientele. Even the Impressionist style with its emphasis on light effects, its sensitive, delicate surfaces, its frequent use of white, its loose brush stroke, and its sketchiness of execution was regarded as “feminine,” in the positive as well as in the negative sense. In 1896, the year which saw the presentation of a posthumous retrospective of Berthe Morisot, the critic Camille Mauclair, looking back, described Impressionism as an altogether “feminine art” and even presented Morisot as the only true protagonist of this style. The exhibition in the Schirn Kunsthalle will critically question this biased understanding focusing on the sex of Morisot and her colleagues rather than on their achievements as modern artists for the first time.

The exhibition in the Schirn Kunsthalle Frankfurt also evidences though that the four women artists were taken seriously and respected by their male colleagues and by many critics at their time. Though they partly fell into oblivion in later years, works by Morisot and Cassatt have become an integral part of the most important international collections and number among the desired works at auctions. However, they still do not enjoy a public attention comparable to that of their male colleagues. The Schirn’s ambition is to contribute to presenting this exciting aspect of Impressionism not really well known to a wider public.

Berthe Morisot (1841–1895) was one of the founding members of the Impressionist movement. She was born into a well-to-do French family and took private painting and drawing lessons. She was a student of Camille Corot in the 1860s, and a successful exhibition in the Salon de Paris made Manet become aware of her, with whom a respectful friendship developed. With one exception, Morisot took part in all “Impressionist exhibitions” and, with her relaxed brushstroke and palette of light colors, influenced even Manet who had preferred dark tones for his paintings until then. Her favorite subjects in painting comprised family scenes, portraits of women and children, interiors, landscapes, and views of harbors. In 1877, she married Eugène Manet, Édouard Manet’s brother, with whom she had a daughter, Julie, who frequently posed for her.

Mary Cassatt (1844–1926) began to study at the Pennsylvania Academy of the Fine Arts in Philadelphia in 1861. She moved to France in 1874 and joined the Impressionists in Paris. As a follower of the group around Degas, she earned great respect and attention from her contemporaries. Her foremost subjects are portraits, scenes at the opera, and the relationship between mother and child – a theme to which she dedicated herself without sentimentality and relying on a style of her own. Especially Cassatt’s pastels are among the most extraordinary works of her era. Her graphic works became well known, too; their two-dimensional, clearly outlined forms reveal the influence of Japanese woodcuts. In 1914, Cassatt became blind and had to give up her career as an artist. That Impressionism enjoyed popularity in the United States at an early point in time is partly due to her activities. Her oeuvre has hitherto been intensely analyzed in the USA above all.

Having been a student of Manet and become known as a colleague portrayed by him, Eva Gonzalès (1849–1883) has only been included in minor group shows together with Morisot and Cassatt. At the age of sixteen, Eva Gonzalès began to study drawing and painting in the studio of the painter Charles Chaplin, who had only female students. Although Eva Gonzalès is classified as an Impressionist artist, she – like Manet – participated in none of the group exhibitions of these painters. She frequently portrayed women, but also dedicated herself to still lifes and landscapes. After having given birth to a son, Eva Gonzalès died from an embolism in 1883. The Schirn Kunsthalle Frankfurt presents a high-quality selection of her work that has been only insufficiently appreciated so far.

The painter Marie Bracquemond (1840–1916) was the porcelain painter and graphic artist Félix Bracquemond’s wife. Her husband involved her in his work, and she produced designs for porcelain and wall decorations. One of these designs, which she presented in the Salon de Paris of 1874, attracted Degas’ attention, who introduced the artist to Renoir and Manet whose paintings she admired. She showed her paintings at several exhibitions of the Impressionists. Félix Bracquemond had only little understanding for his wife’s goals as an artist and seems to have been jealous of her success. Worn down by his criticism, she limited her activities as an artist to her immediate environment and gave them up altogether after 1890. Unlike her female colleagues’ quite successful careers, her life and development may be regarded as typical of the era. Taking the most recent research results into account, the exhibition in the Schirn Kunsthalle Frankfurt, including more than 40 works, will be the most comprehensive presentation of works by Marie Bracquemond since 1919.

The approximately 150 works shown in the exhibition come from numerous international museums such as the Musée d’Orsay, Paris, the Petit Palais, Paris, the Musée Marmottan Monet, Paris, the Musée Fabre, Montpellier, the Metropolitan Museum New York, the National Gallery of Art Washington, the Newark Museum, the Philadelphia Art Museum, the Kunsthalle Bremen, and the Museum Langmatt in Zurich, as well as from various private collections. An exhibition of the Schirn Kunsthalle Frankfurt and the Fine Arts Museums of San Francisco. “Women Impressionists” will be shown by the Fine Arts Museums of San Francisco from 21 June to 21 September 2008.

A comprehensive catalogue in German and English with contributions by Jean-Paul Bouillon, Anna Havemann, Pamela Ivinski, Linda Nochlin, Sylvie Patry, Ingrid Pfeiffer, Griselda Pollock, Marie- Caroline Sainsaulieu, Hugues Wilhelm, a.o. will reflect the current research positions. In addition, a literary publication presenting four stories by contemporary authors will be published: Diane Broeckhoven, Noëlle Châtelet, Annette Pehnt, and Alissa Walser have dedicated themselves to the women impressionists’ lives especially for this occasion. Both the catalogue and this volume will be published by Hatje Cantz.