Music as Social Praxis. Installations and video. The exhibition discusses music as an open system, as a field for potential connections and dissociations. Music becomes the vehicle for constructing identity and difference, orientation and dislocation, collectivity and individuality. Works by Cory Arcangel, Jeremy Deller, Iain Forsyth + Jane Pollard, Benny Nemerofsky Ramsay and many others. 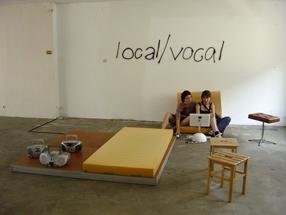 „Without music the world would be dead, no matter what kind of music.“ (Dave Day Havlicek/The Monks)

Music plays a pivotal role in many people’s lives as part of everyday popular culture because it is so unmediated. At times as a real world, at others as a reflecting surface for one’s own and others’ projections, music provides scope for manifold liberating, activist or subversive strategies at a far remove from consumption or glamour.

The exhibition ‘Just Play – Music as Social Praxis’ at the Edith Russ Site for Media Art discusses music as an open system, as a field for potential connections and dissociations, feedbacks and appropriations; as myth and the possibility of freedom and scope, of authenticity and commitment, of enthusiasm and alternative action. The works shown are about a social praxis that raises issues relevant to society as a whole rather than merely exposing the usual market mechanisms or deconstructing symbols and signs. Music becomes the vehicle for constructing identity and différance, orientation and dislocation, collectivity and individuality.

A story of community and friendship, of collective vs individual experience is told by Johanna Billing’s work ‘You Don’t Love Me Yet’ (video projection and DVD archive, 2002–2007), which takes as its starting-point the Roky Erickson song of the same title.
Individual passions and communal commitment are also at the centre of Jeremy Deller’s musical audioportrait – from an orchestra of wind instruments via jazz information, a rock band, a church choir, a Country and Western Duo to a Grunge band – ‘This Is Us. Music from Redhook’ (2003).

Kristin Lucas’s video installation ‘Celebrations for Breaking Routine’ (2002) on the three British girlie bands Flamingo 50, Venus and Exit 3, underscores the liberating and activist potential of producing music.
Touching insights into individual ways of seeing the connections between music, love and loss are provided in ‘Make Me Yours Again’ (2007), a video work by Iain Forsyth and Jane Pollard.

Whereas the above mentioned works provide scope for performative actions by individuals, Elke Marhöfer and Anne-Marie Schleiner deliberately leave a gap in their installation ‘local/vocal’ (2003) which every single one of us, male or female, is challenged to fill. Two online text archives – being ‘professional’ and appearing ‘amateurish’ – provide two opposing models.

In his video piece ‘Je changerais d’avis’ (2000), Benny Nemerofsky Ramsay presents himself as mirroring disappointed hopes and desires when he emphatically interprets the chanson of the same title by the French singer Françoise Hardy, commenting on it with weather forecasts and parallel translations, even in the language of gesture.
Marisa Olson, on the other hand, uses the words of others with (self) irony rather than emphasis when she and Abe Linkoln interpret the collective text of a blog by singing it in ‘Abe & Mo Sing the Blogs’ (2006) or when Olson acts like a star in ‘Universal Acid’ (2006) and Linkoln makes her passionate performance mutate into psychodelic video clips.

Cory Arcangel’s work ‘Beach Boys/Geto Boys’ (2004) in which video recordings of two very different bands are fused to create a new, supratemporal hybrid, also plays with the absurdity of media constructions.
Aesthetic and socio-political experiences and issues are also subversively reflected in ‘1+1-1’ (2007), a sophisticated video installation by Hadley+Maxwell, which transposes elements of the 1968 Jean-Luc Godard film One Plus One into a new language of forms emphasising the processual aspect.