For thirty years now the world-famous photo artist has been creating absolutely fascinating, enigmatic images. They release photography from its obligation to reality and fit it into an artistic reflection on time, recollection and the transitory nature of things. 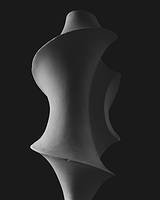 For thirty years now the world-famous photo artist Hiroshi Sugimoto (born 1948) has been creating absolutely fascinating, enigmatic images. They release photography from its obligation to reality and fit it into an artistic reflection on time, recollection and the transitory nature of things. “What I concern myself with”, the artist said in 2002, “is using the means of photography to make visible an age-old stage in human recollection. Whether it is individual or cultural recollection or the collective recollection of humankind as a whole: it is a matter of going back into the past and remembering where we come from and how we have emerged”. Sugimoto produces pictures which are extremely reduced in form, as a stimulus for thought; in them he examines the essence of photography as well as fundamental phenomena of the human experience.

The work of the Japanese artist, living in the USA since 1970, is built up in a series. However each individual photograph contains the spatial body of thought particular to its series. Marcel Duchamp’s approach, the American Minimal and Concept Art shape his art, as do the art of ancient Japan and Far Eastern aesthetics. Sugimoto works with an old large-image camera from the late 19th century. His earlier works increasingly overstep the limits of photography as a medium, in order to open up space with sculpture and architecture. Sugimoto’s pictures are characterised by perfect tranquillity and beauty, by the greatest degree of precision and by the aura they project. They demand the observer to concentrate, to switch in a slow rhythm between the close-up view of the pictures, with their richness of detailed information, and the overall arrangement of the works within an area of space. Sugimoto evaluates photography as a medium of reflection and of contemplation.

The exhibition in MdM Mönchsberg, the second location in the jointly arranged tour (three locations remain) is so far the largest retrospective of the artist’s work in the German-speaking countries. It is presented to the visitor on an overall area of more than 1,000 m², on the whole of the fourth and part of the third level, displaying Sugimoto’s groups of work in a defined series of sections: Photogenic Drawings, Lightning Fields, Portraits, Conceptual Forms and Sculptures on Level 3, Seascapes, Theaters and Drive-in Theaters, Pine Trees, Colours of Shadow, Dioramas and Architectures on Level 4.

In cooperation with K20, Kunstsammlung Nordrhein-Westfalen in Düsseldorf, the SMB Nationalgalerie in Berlin and the Kunstmuseum Luzern, the Hatje Cranz Verlag publishing house produced and published a comprehensive catalogue (384 pages and ca. 200 illustrations; price: Euro 49.80).