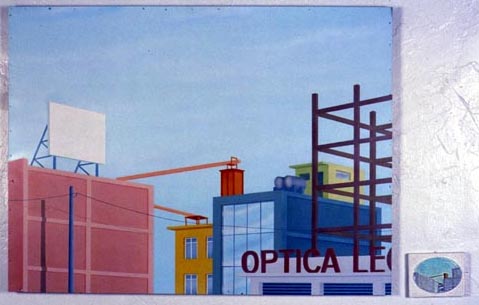 With the onslaught of media, technologies and the millennium, we find ourselves in a new place where reality is open for a new definition. What we accept and what we are willing to accept as reality has sent us searching.

This exhibition offers us the new visual and tells us that we no longer need to cling to the actuality of the now, the conventional. Through a variety of medias, the artists present work under the premise that authenticity is short sighted.and suggests a desire for a revived reality. It is this new realism that we want, accept, glamorize and desire. The artists allow us to believe that this is the true experience which negates the original. Interpretation and an uncanny resemblance to the aesthetic norm further complicate expectations. By utilizing real possibilities and everyday surroundings, these works cultivate potential for a new actuality, a dirty realism.

Francis Alys, in his series of sign paintings, highlights the subjectivity inherent in portraiture painting. Alys paints an image from a photograph then commissions a sign painter, a cultural signifier of Mexican locale, to recreate the same image. The two paintings are presented together and emblematically create the question â€˜what is the real image?â€™. This also occurs in Oliver Bobergâ€™s photographs of models that he constructs using real and fabricated materials depicting German landscapes. These stark deliberate constructions are seemingly ordinary until the realization that Boberg spends over two months perfectly constructing a scene that is more real than reality. Dexter Dalwoodâ€™s work takes this idea of recreating a place one step further as he paints places he has never seen before. Dalwoodâ€™s work deals with the pseudo-memory lying between fiction and familiarity as in the painting, Hitlerâ€™s Bunker (1999), where he has interpreted the invisible or the unseen place that is a part of the collective imagination.

Joachim Koesterâ€™s work, Day for Night, Christiania (1996) examines a real locale that has taken on a mythical status. Christiania, an area in Copenhagen that was originally built in the 1960â€™s as an utopian society, has slowly faded from these once idealistic dreams. Koester uses a day for night filter, a popular cinematic technique that creates a night scene during the day. Using this filmic language, Koester acknowledges the divide between the actual and the mythological through the retelling of the subject matter as narratives. Sarah Morris gives us image bytes of the city she sees and experiences. As in her painting, Midtown-Marriot Marquis (1998), Morris processes and deconstructs the city inside and out reducing the details to color and energy.

Sue de Beer is influenced by the dynamics of the horror scene genre. Her photos become a surrealist situation recalling a characteristic union of horror films and choreographed body art pathologies. Claire Coreyâ€™s iris jet prints have manipulated an image digitally with the newest software. This is a distinctive contrast to de Beerâ€™s intentional omission of technology which allows the viewer to easily discover that the scene is an obvious deception. In Coreyâ€™s work, there is no trickery. Corey paints on the computer screen directly, creating decadent, visual abstractions Able to create a vibrancy impossible in traditional painting, Coreyâ€™s luscious outputs also illustrate how technology can make painting "better" than it thought possible.

Pat de Grootâ€™s paintings of seascapes create the vision outside her window in Cape Cod better than actuality. Restricting herself to one painting a day, she stands in the exact same spot each time subtracting any debris or imperfections. De Groot paints her view of perfection; her idealized vision of sky and water break down into abstracted blocks of color. This construction of image and manipulation of the viewer is also what Rebecca Quaytman controls in her paintings. By placing the viewer between the space we are in now and the place that she creates in the picture, Quaytman sets up an uncomfortable confrontation between the image we see and the memory of the original installation of the painting. Quaytman wants us to realize what we are experiencing by viewing her painting which includes the previous installation.

Fischli & Weiss have made a career of reconstructing greatness from the ordinary. In their sculptures and photographs, they arrange everyday simple material and objects that seemingly drift into our unconsciousness into something out of the ordinary or somewhat fantastical. As in their garden series photographs, Fischli & Weiss morph different species of flowers together to make a beautiful hybrid species. They are able to suggest the impossible while making it look as if it were never not possible.

Today, truth can be manipulated, manufactured, subjective, constructed and technologically enhanced. Not restricted to didactism and straight interpretation, the works in this exhibition articulate that the real is not just reality, the very key to dirty realism.