The National Museum of Contemporary Art 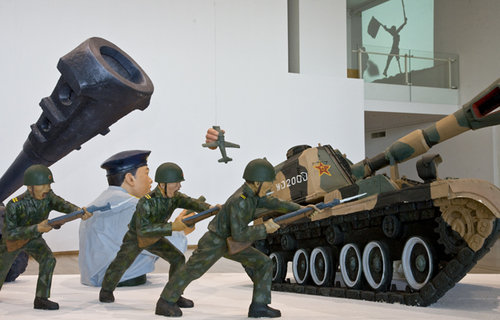 Animations/fictions presents curatorial research over a group of works from the Fonds National d'Art Contemporain that have been consigned to the National Museum of Contemporary Art (MNAC) in Bucharest. The exhibition spotlights different ways in which comic strips and cartoons have been used by French and international contemporary artists.

Its guiding principle is how cartoons have appeared in citational form and using different approaches: initially in the Pop Art style before becoming, at a later stage (1990s-2005) and in a context removed from animation, an explicit source of inspiration. The featured artists express highly sophisticated concepts in an easily understandable language. By refering to contemporary concepts into images, borrowing childhood iconography, or creating images inspired by Walt Disney or mangas, beyond their connotations of an all-pervasive subculture, mass culture and media in today's globalised world, all these images remain powerful vectors for sometimes dramatic events. They reveal an adult awareness of the gravity of the present day through a child's wide-eyed gaze.

This selection of works, all very different in their form and message, also highlights how contemporary figuration draws on its close ties with the various genres of popular culture, switching it towards a different area.

The exhibition is being shown to the Romanian public at the MNAC from January to end of August 2008. Other events (talks) are also being staged at the MNAC or at the Institut Français in Bucharest, which is also hosting a programme of residencies for French artists in 2008.