The human being is always the focal point of his research, even though animals and architecture frequently serve as models. Sculpted in wood, his work represents a new form of figurative sculpture, with a simple, rough-hewn appearance. The work process is manifested as crevasses, splinters and fissures, and the wood is shown as a living substance with an aesthetic dimension. 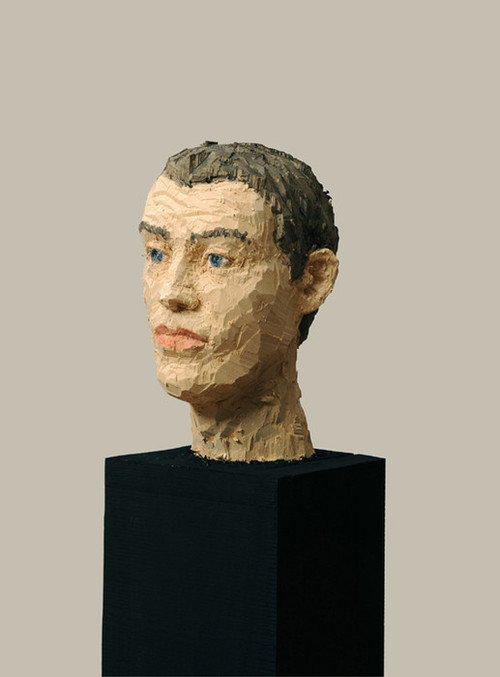 We have pleasure in presenting new works by the German sculptor Stephan Balkenhol (*1957 in Fritzlar/Hessen, lives and works in Karlsruhe and Meisenthal/France) at our next exhibition. Stephan Balkenhol is one of the most important contemporary sculptors. He teaches sculpture at the Karlsruher Kunstakademie, and many of his wooden works are on display in public places. His sculptures, which have for some time been combined with reliefs, as well as his drawings, are regularly exhibited in international museums and galleries, for example at Monica de Cardenas in Milan, at the Galerie Tomio Koyama in Tokyo, at the Galerie Forsblom in Helsinki, and at the Galerie Rüdiger Schöttle in Munich. Galerie Mai 36 has been exhibiting work by Stephan Balkenhol on a regular basis since 1989.

SStephan Balkenhol became interested in the history of figurative sculpture in the early 1980s, ever since he decided to respond to the minimalist strategies of his former teacher Ulrich Rückriem (with whom he studied at the Hamburger Hochschule für Bildende Künste from 1976 to 1982) with a minimalist human image. The human being is also the focal point of his work, even though animals and architecture frequently serve as models. Sculpted in wood, his work represents a new form of figurative sculpture, with a simple, rough-hewn appearance. Balkenhol's motifs are larger-than-life or dwarflike men, women and animals, heads and hybrid figures of humans and animals sculpted from huge tree trunks. The same tree trunks also serve as the plinths, which are inseparably joined to the figure. The work process is manifested as crevasses, splinters and fissures, and the wood is shown as a living substance with an aesthetic dimension. As a final step, the figures are coloured and displayed singly or in groups. The sculptures of men and women have an aura of agelessness, and they seem so ordinary in their simple, everyday clothing and attitudes that we feel we could encounter them anywhere.

In stoic poses, they seem to be in a state of suspended animation, gazing into emptiness or at a point unknown to the observer. Thus the figures remain distant, anonymous and enigmatic, and strangely lacking in emotion. The observer feels reminded of something, only to doubt his perception a moment later. This creates a feeling of discomfiture because the hyper-individual and timeless figures hold up a mirror to the observer. With them, Balkenhol formulates a homage to universal humanity. This is particularly evident in the sculptures in public places: by placing anonymous figures instead of official authorities on his plinths, Balkenhol contradicts the tradition of monumental sculpture. A gesture with which he demonumentalises the monument and at the same time exalts the anonymous human being. [Text: Dominique von Burg, translation: Maureen Oberli-Turner]