The 16 Ways. Drawings, embroideries and a video installation. The show explores sexual and pornographic issues and their relation to urban and domestic life, suggesting the reciprocal influence between the 2 areas, which reflects on modernisation, industrialization and questions of gender perception. 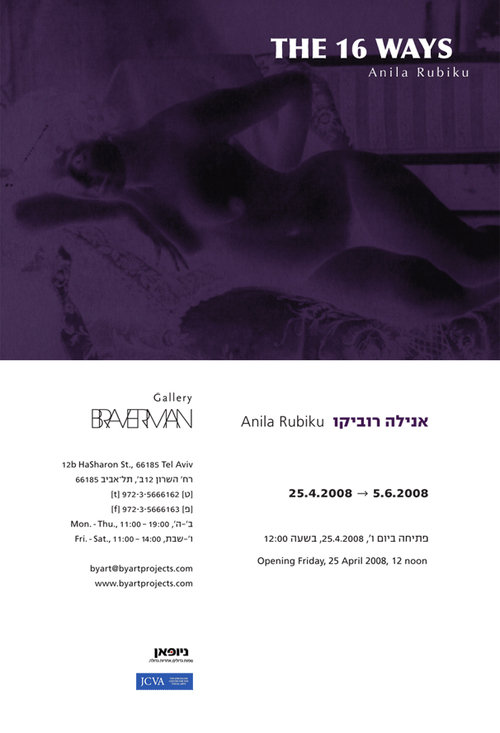 Braverman Gallery is proud to present a new Solo exhibition by Anila Rubiku, The 16 Ways.

Rubiku's show will present new works including drawings, embroideries and a video installation.
The show explores, through the different installations, sexual and pornographic issues and their relation to urban and domestic life, suggesting the reciprocal influence between the two areas, which reflects on modernisation, industrialization and questions of gender and body perception.

The installation Urban Pornitecture, (see image above) depicts 16 maps of major capitals around the world (among them Tel Aviv, Jerusalem, London, Moscow and others) which combine explicitly sexual, pornographic images with road maps and iconic architectural symbols. Here the conceptual strategy builds on concealing and revealing, uncovering even only for a moment that which the body does not show and the space hides: desire, sensuality, fears, the invisible relationships that tie us to each other with strange and exceedingly strong geometries. The eternal dialectic – between inside and outside- touches on the existential, philosophical, and even the architectural spheres: the body and the home. The drawings in the “Urban Pornitecture” seem to be maps for lovers who have lost their way; here, the intimate vision and recognition of a place that is only apparently neutral is entrusted to sexual exchange. Love is consumed behind each window; in the dark of a room we allow ourselves freedoms that are unimaginable to others.