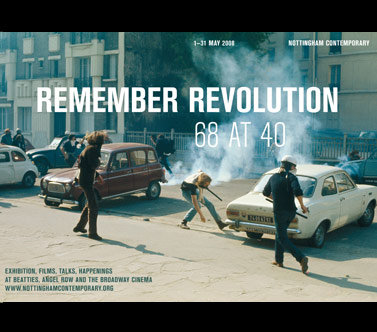 In May we are tracing the legacy of 1968, the year when the underground went overground, and mass protests erupted across Europe and the United States, many directed against the war in Vietnam. Together with the Broadway Cinema, we are showing some of the films that define and record protest and participation.

Disobediance, a unique video archive, curated by Marco Scotiini, connects arts to political revolt from 1977 to the G8 Summits, through 25 films shown in an installation by Luca Frei

If, in the 19th century, philosophy was German and revolution French, in the 20th century philosophy was French, and revolution Italian, as Hardt observed. There, 1968 lasted for the next ten years. Italy in the 1970s is also where our exhibition starts. It ends at the G8 Summit in Heiligendamm, Germany in June 2007 — though Disobedience is intended as a work in progress, reflecting histories in the making, its contents and form changing with each manifestation.

This remarkable archive charts the relationship between recent art, film, critical media practices and political activism. Curated by Marco Scotini, Disobedience is an atlas of political resistance played out around the world. In Nottingham, Disobedience offers close-up encounters with six movements, ‘1977: the Italian Exit’, ‘Reclaim the Streets’, ‘Disobedience East’, ‘Argentina Fabrica Social’, ‘Protesting Capitalist Globalisation’ and ‘Disobedience and the Society of Control’.

Negri compares the selforganisation of political resistance today to the swarming of bees. Disobedience is testimony to how art and ideas inform and reflect the flux of political activism in the present. In resisting Empire, ‘can we retain a clear separation between intellectual production, political action and culture?’ asks Scotini. Increasingly, the answer is no.

Swiss artist Luca Frei is creating Untitled (Interferences), a striking sculpture/ design for Disobedience in Nottingham that exploits the space’s large street front windows. For Frei, making art is part of public life. He explores the potential of social change by inviting involvement and creating conditions for active and cooperative learning. The transformation of knowledge into action is central to his work. It can be viewed, read, shared, manipulated and inhabited, and takes the form of books, posters, furniture and display systems. Its allusions often stem from radical, counter-cultural ideas from the 1960s and 1970s. For instance, last year he had Albert Meister’s ‘The So-Called Utopia of the Centre Beaubourg’, 1976,

published in English for the first time. The novel is a satiric science fiction that envisages a subterranean 76 floor free cultural facility beneath Paris’ Pompidou Centre.