Imogen Stidworthy explores the physical and social impact of the spoken word. She looks at how the use of language affects communication between people and the objects around them through her stratified installations centring on language and combining a variety of media such as film, video and audio. In this exhibition she presents her own installations, and the work of some twenty artists chosen by her and material that is not normally regarded as art. 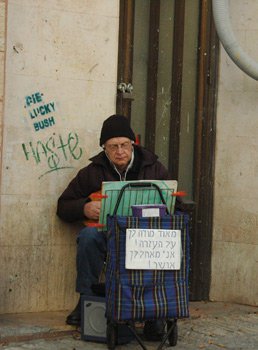 Imogen Stidworthy explores the physical and social impact of the spoken word. She looks at how the use of language affects communication between people and the objects around them through her stratified installations centring on language and combining a variety of media such as film, video and audio. The artist makes language manifest in the space: she likens speaking to unrolling a carpet. Her work hinges upon questions like: What is language? What do we do with language? What does language do to us and to us in relation to others? Who or what is speaking? How is it, she wonders, that two people manage to understand one another - even in situations where no language is used - when something disturbs the connection between a thought and a word or between those people?

In DIE LUCKY BUSH Stidworthy explores this theme by means of three of her own installations, the work of some twenty artists chosen by her and material that is not normally regarded as art. The artist came across the title on the street in Jerusalem [Israel] in December 2007. The words ‘Die Lucky Bush’ had been graffitied onto a wall behind a street musician sitting on a chair playing the balalaika. The statement serves as a shibboleth, i.e. a word used to detect whether or not the speaker belongs to a particular [cultural or political] group by his or her pronunciation. For English speakers the words ‘Die Lucky Bush’ allude to George Bush or perhaps to 'fortunate bushes', but in Hebrew it is the phonetic transcription of ‘Stop the occupation'.

‘Die Lucky Bush’ is not really a watchword, like for instance the shibboleth ‘Schild en Vriend’ or 'Shield and Friend' used during the Battle of the Spurs to unmask the French and the gallicized bourgeoisie. Rather it is an ideologically charged variation of the sort of word play Stidworthy is so interested in, the osmosis or differentiation that can result when language, word and sound interact. The photograph of the graffiti is emblematic of an exhibition concerned with the thresholds of language: the borders or meeting of different languages. For example, Werner Feiersinger's work - a fibreglass object reminiscent of an upside-down boat placed diagonally across the floor of the central exhibition space - immediately becomes a physical threshold in an exhibition which unfolds like an acoustic landscape, strewn with linguistic thresholds. The central question in DIE LUCKY BUSH is what other form of meaning can arise when something is experienced
as unreadable.

The point of departure for the exhibition is Stidworthy’s film installation I hate [2007], which the artist created for Documenta 12. The subject of the work is the photographer Edward Woodman who lost his power of speech in an accident and his long struggle to rediscover his fragile voice. Practising words is part and parcel of his photography, which also changed after the accident. As a professional photographer, between 1970 and 2001 he documented installations, exhibitions of contemporary art and architecture models. Since the accident he has used the camera to record social change, and the whole process of change around him. A series of photographs relates to the King's Cross area where the new Eurostar terminus is located. This subtle configuration of video, illuminated news trailer and sound are shown here for the first time since Documenta 12.

The second Stidworthy installation in the exhibition is entitled Get here [2006], an example of the Scouse dialect spoken in Liverpool. For the sound recording [reproduced in surround sound] she called upon Liverpudlians, Somalian refugees and actors trained by professional voice coaches to master the authentic Scouse dialect. "Get here!" is a typical command often heard on the street, for example, when mothers call their children to order. It characterizes the Liverpudlian culture, but at the same time the installation raises questions about place and identity. The diversity of voices and intonations alters words and relationships between the speaker and listener. The word ‘here’, normally a simple and quite straightforward indication of place or position, suddenly becomes a multiple, even contradictory and intangible notion. For the exhibition at the MuHKA Stidworthy gives her work a more sculptural form for the first time.

Stidworthy's third work in the exhibition bears the title 7 A.M. Every morning crowds of people pass through the gates of Tiantan Park in Beijing. The artist's video evokes the morning exercises and the social and acoustic space which the park becomes. The isolated figures and small groups among the trees fill the park with sound. Time and distance are measured by the hundreds of simultaneous, but individual rhythms, which evolve into an extraordinarily complex, percussive language, both acoustically and visually. The film examines the relationships, the dynamic and the implications of this social-acoustic landscape for the public.

For the first time Stidworthy uses the exhibition as a way of directly relating the ideas she employs as an artist to the work of other artists and other material. In so doing she deals not only with the purely linguistic meaning of language, but she also harnesses other forms of language – visual language, the language of sound and body language. So apart from spoken language, DIE LUCKY BUSH also comprises spatial and physical sounds and visual language. Some works are concerned not only with linguistic distinctions, but also play on political and cultural differences. There are for example the drawings in which the French educationalist Fernand Deligny recorded the actions of severely autistic youngsters who had been written off as unmanageable; whistling a lee hazelwood song through a straw in which Dominique Somers uses her body physically to record a melody graphically; Say: "Parsley” by Caroline Bergvall and Ciaran Maher, where the point of departure is a shibboleth; Lak-kat by Anri Sala, a film about language, memory and meaning; Trepanaciones, a sound work in which Teresa Margolles examines the Western perception of death, and the compositions on paper by modern composers such as John Cage and Anestis Logothetis, which can be read as spatial-acoustic maps of sound works.

In a publication, Imogen Stidworthy pulled together conversations, essays, graphic systems and scores. Though it can be seen as a part of the exhibition, it is in fact the embodiment of research that goes a
step further.

Imogen Stidworthy developed the project at the invitation of MuHKA_curator Edwin Carels and in dialogue with the Programme Director of the Liverpool Biennial Paul Domela.