11-5 every day except Tuesdays

New Horizons in Landscape. The exhibition addresses contemporary ideas of exploration, population of the wilderness, land usage, environmental politics and the relativity of aesthetic beauty. The project comes at this critical time, an era when the world is more ecologically aware yet more desperately in need of solutions than ever before. While deeply aware of the legacy of the landscape, each of these artist reinvents the genre to produce works that look beyond vast beauty to address current environmental issues. 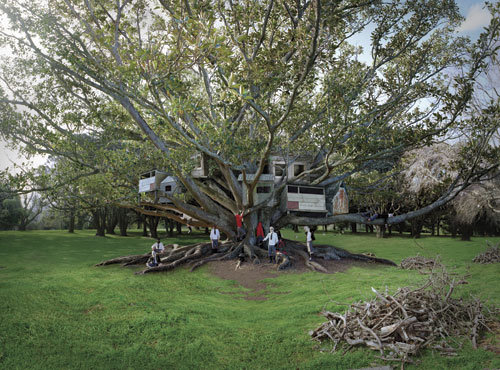 From the earliest renderings on cave walls, man has been compelled to depict the world around him. The tradition of portraying the landscape has threaded together movements as varied as the mid-19th century Hudson River School and the Earth Art of the 1960s and ‘70s. Badlands: New Horizons in Landscape, opening Sunday, May 25, 2008, at MASS MoCA (Massachusetts Museum of Contemporary Art) in North Adams, opens the next chapter in the landscape tradition, addressing contemporary ideas of exploration, population of the wilderness, land usage, environmental politics and the relativity of aesthetic beauty. Badlands comes at this critical time, an era when the world is more ecologically aware yet more desperately in need of solutions than ever before. The artists in this exhibition share this collective anxiety ­ some turn to the past to see how their predecessors negotiated the terrain of the landscape while some propose entirely new ideas. While deeply aware of the legacy of the landscape, each of these artist reinvents the genre to produce works that look beyond vast beauty to address current environmental issues.

The exhibition will be accompanied by a color catalog published by MIT Press which will include essays by Gregory Volk, Tensie Whelan, Ginger Strand, and exhibition curator Denise Markonish.

Some of the artists in the exhibition both develop and reinterpret traditional genres of landscape depiction. Robert Adams helped found the genre referred to as “New Topographics,” which focuses on a non-idealized view of the American landscape. At first glance, his black and white images of Colorado immediately invite comparison to another Adams – Ansel, father of modern landscape photography – but Robert Adams takes a contrary approach, making small images of ordinary or even ugly landscapes seem sublime.

Ed Ruscha re-invents the traditional awe-inspiring landscape in his Country Cityscapes series in which he takes calendar-like panoramas and cuts away sections of the prints, filling the voids with text (phrases like “It’s payback time” and “You will eat hot lead”). Known for his ironic perspective on American vernacular imagery, Ruscha allows the landscape to talk back, this time with a stereotypical Wild West twang.

Paul Jacobsen and Alexis Rockman both tackle the formidable Hudson River School, a movement whose renderings of pristine unspoiled landscapes reinforced early ideas of America’s Manifest Destiny. Jacobsen and Rockman show a new American future, one where our collective sins of the past come back to haunt us, depicting landslides taking over hillside homes or heaps of garbage spoiling a green pasture. Both artists create lushly painted works: Rockman, dealing with environmental decay, and Jacobsen, addressing human survival in a post-apocalyptic landscape.

Starting their career alongside the Fluxus and Earth Artists of the 1960s and ‘70s are the Boyle Family, a unique team of husband and wife Mark Boyle and Joan Hills along with their two children Sebastian and Georgia. The Boyles’ series Journey to the Surface of the Earth are mixed-media painting assemblages that recreate in an extremely realistic manner different squares of terrain chosen by blindly throwing darts at a world map.

Continuing this nod to Earth art are Vaughn Bell’s Personal Biosphereswhich give gallery visitors their own miniature landscapes to experience by popping their head into Plexiglas domes filled with small working ecosystems. Bell’s new custom biospheres for Badlands will be based on the landscape of North Adams.

A micro and macro view of the landscape

Some of the artists venture out into the world examining the landscape from both macro and micro viewpoints. Mike Glier’s project Latitude, Longitude and Antipodes targets specific locations on the globe to create a series of plein air improvisational paintings. For Latitude, which will be on view in Badlands, Glier stayed in one place (his own backyard) for an extended period to paint the changes of season as the earth shifts on its axis; while for Longitudehe is currently traveling along the 70th meridian of longitude between the Arctic Circle and the Equator to paint the changing landscape. Gregory Euclide also explores his own backyard through a series of mixed-media constructions that combine delicately drawn bucolic landscapes that are crumpled like trash and combined with bits of the outdoors ­ dirt, branches and fungus. Marine Hugonnier’s film trilogy (Ariana, The Last Tour and Traveling Amazonia) deals with the political and environmental regulation of landscape attractions. Ariana (2002), which will be on view in Badlands, explores her inability to take 360° panoramic images of many of the most beautiful landscapes in modern Afghanistan.

Jane Marsching and Mitchell Joachim/Terreform travel even further afield – and into the future – with Arctic Listening Post (2006-present), an inter-disciplinary multimedia project that deals with historic impressions of the Arctic and how we can imagine a future there. With the fanciful air of Jules Verne, Marsching and Mitchell Joachim/Terreform are working in collaboration with scientists, architects, artists and even science fiction writers to conceive how we could sustain life at the North Pole in 100 years.

How disasters affect the land

Another group of artists addresses both natural and man-made disasters and how they affect the land and its inhabitants. Leila Daw’s large-scale paintings deal with floods and volcanoes and how they impact both the landscape and civilization; in her work the constructed environment is always being wiped out as a lesson to the interlopers. Melissa Brown and J. Henry Fair deal more directly with the beauty of a declining landscape. Brown’s Anime-inspired paintings look like postcard images of national parks until closer examination reveals an oil slick on the surface of the water or a technicolor view of Niagara Falls. Fair’s unaltered aerial photographs seem to capture beautiful abstractions of the landscape, while, in truth, their “beauty” is actually the result of man-made chemical processes that are actively polluting the landscape.

Land use and aesthetics

Sustainability and politics of land use are at the forefront for artists who look at how people use the landscape, and also at alternative modes of energy. Center for Land Use Interpretation’s (CLUI) mission is to better understand land and landscape usages through research, artist residencies and exhibitions. For Badlands, CLUI will present a project entitled Massachusetts Monuments: Images of Points of Interest in the Bay State, which uses photographs and text to take museum visitors on a virtual tour of land usage throughout Massachusetts. Visitors weave through a world of plants and paths, occasionally discovering small carved marble highways and cityscapes in Yutaka Sone’s indoor “jungles” -- ideal worlds where nature engulfs “progress.” Joseph Smolinski, on the other hand, provides a creative solution to the politics of the land use by creating a wind turbine made to look like an enormous pine tree – not unlike the cell phone tower “trees” that dot our highways – merging a facsimile of a natural environment with a renewable power source.

Though much of the work in Badlands deals with decline and ecological ruin, the exhibition is not without beauty, and the ultimate message is, perhaps, just to look, really look at the landscape around you. The final group of artists marvels at the physical “beauty” of the natural world. Anthony Goicolea straddles fantasy and reality by presenting monumental photographs of unpopulated, surreal landscapes that reference the Hudson River School and Ansel Adams but are decidedly contemporary, and almost sinister.Snowscape (2002-03), a 26-foot panoramic print, will be installed in MASS MoCA’s Tall Gallery. Jennifer Steinkamp’s projections offer views of swaying trees or dancing flowers that blend a sort of technicolor beauty with digital rather than naturalistic effect.

Nina Katchadourian entices viewers to look beyond the gallery walls to the outdoors. Visitors who search long and far enough will be rewarded with the sight of an altered tree, installed with permanently brilliant fall foliage, impervious to the change of seasons. Mary Temple similarly plays with traditional notions of how we look at trees. As soon as viewers of Badlands walk into the gallery they will see shadows of trees on the walls, miraculously visible without nearby windows. This is Temple’s work, subtle wall drawings of the shadows of trees, both seemingly present and disappearing before the viewer’s eyes, just like the landscape itself.

The exhibition, which will cover the entire first floor of Building 4, will be open to the public starting Sunday, May 25, 2008, and running through Spring 2009. There will be an opening reception for members only on Saturday, May 24, from 6 – 8 PM.

Badlands is supported in part by Elizabeth Firestone Graham Foundation and the LEF Foundation.

MASS MoCA (Massachusetts Museum of Contemporary Art) is one of the largest centers for contemporary visual and performing arts in the country and is located in North Adams, Massachusetts, on a restored 19th-century factory campus. MASS MoCA’s galleries are open 11 – 5 every day except Tuesdays. Gallery admission is $12.50 for adults, $9 for students, $5 for children 6 – 16, and free for children 5 and under. Members admitted free year-round. For additional information, call 413 662 2111 or visit www.massmoca.org.