The Undeniable Success Of Operations. The basis of the exhibition was the wish to do a monographic presentation of the work of Falke Pisano. Her lecture/performances, sculptures, publications and videos move in the abstract space between language and object. In this show, that work in turn is placed in dialogue with works by nine other artists who investigate the relativity of language and object and the position of the artist and spectator. 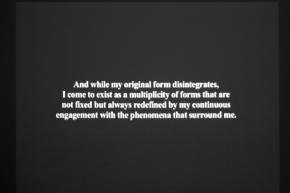 Monographic presentations often imply a self-reflective moment, a moment in which the artistic process of the artist is briefly frozen and can be subject to investigation. The exhibition ‘Object, The Undeniable Success of Operations’ is constructed around that fact. The basis of the exhibition was the wish to do a monographic presentation of the work of Falke Pisano (Amsterdam, b. 1978). Her lecture/performances, sculptures, publications and videos move in the abstract space between language and object, in a process in which these two are continually brought into a dependent and thus fluctuating relation with one another through the indirect presence of the artist. In ‘Object, The Undeniable Success of Operations’ that work in turn is placed in dialogue with works by nine other artists who investigate the relativity of language and object and the position of the artist and spectator in their work. Their work not only illuminates Pisano’s present artistic position, but also interrogates it by supplying other possibilities and alternatives for it -- and thus endorsing its permanently impermanent character.

The exhibition was assembled by Falke Pisano herself in collaboration with curator Krist Gruijthuijsen.

installation Object and Disintegration: The Object of Three. It is a sculpture/module on which three videos are projected. The work gives an account of the possible disintegration of an object from different perspectives, among them those of the artist and the viewer. The process of disintegration is accompanied with the loss of the autonomy of the viewer, who instigates the process.

The work Screen (Parabolic Reflector) consists of white rectangular elements with one mirrored surface which reflects a hanging sculpture. The screen is loosely based on a room divider screen by the design pioneer Eileen Gray. The hanging sculpture, L’objet complet (The undeniable success of operations), is in turn a repetition of the forms that are visible in framed photographs of three-dimensional collages and unresolved works in progress as they were once to be seen in Pisano’s atelier. These constructions are thus related to current as well as to future work, while their status as ‘failures’ is paradoxically enough both addressed and completely negated in a provocative manner.

The various elements, such as construction and deconstruction in relation to language, objects and the position of the artist and the spectator recur in various ways in the works of Mariana Castillo Deball, Luca Frei, Alexander Gutke, Benoît Maire, Charlotte Moth, Adam Pendleton and Reto Pulfer. An historic work by Anna Winteler, seldom screened before, is also to be seen, the video recording of her Holzperformance from 1981-82. Dan Graham is represented in the exhibition with the video Pavilions (1999), which affords a survey of the sculptural glass pavilions this artist has built over the past three decades, and intentions behind them.

Falke Pisano (Amsterdam, 1978) studied at the Hogeschool voor de Kunsten in Utrecht and in 2005/2006 was a researcher at the Jan van Eyck Academie, Maastricht. Among the exhibitions in which she has shown are ‘Just in Time’, the Municipal Acquisitions exhibition in the Stedelijk Museum Amsterdam in 2006, and more recently in the Lisson Gallery, London (2006), Ellen de Bruijne Projects in Amsterdam (2007, solo) and Galerie Balice Hertling, Paris (2008, solo). She is also participating in the current Berlin Biënnale with a performance in the evening programme.

SMBA Newsletter no. 104, with texts by Krist Gruijthuijsen and Falke Pisano, will appear to accompany the exhibition.

The exhibition is supported by Pro Helvetia