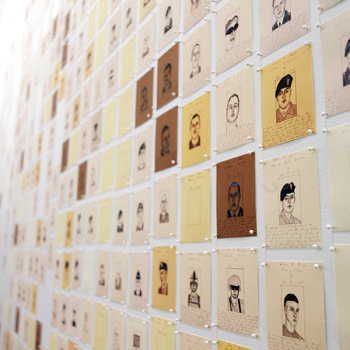 During 2008 the Wanås Foundation is proud to host a thematic project on the significance of memory. The starting point is an international group exhibition entitled Loss, comprising both existing and newly produced works. The project also includes a seminar and an exhibition of competition proposals to the Raoul Wallenberg Square in Stockholm, one of Sweden’s most controversial public memorials.

In an era defined by so keen an interest in the past, it is only natural that subjects such as sorrow, forgetfulness and history should also permeate contemporary artistic expression. The group exhibition Loss includes photographs, installations, sculptures and video works by approximately twenty artists actively engaged in investigating these topics. The works on display follow three main lines of inquiry: works that constitute innovative alternatives to the Western world’s traditional concepts of monuments, works that in themselves are comments on existing monuments, and works that, in a broader sense, take up the issue of collective memory.

To coincide with the exhibition a richly illustrated catalogue is published with texts by Ph.D. Max Liljefors of Lund University, Professor Marita Sturken of New York University and the author Per Wästberg.

The exhibition of models includes background material of the submissions for the Raoul Wallenberg Square in Stockholm, including Kirsten Ortwed’s winning design unveiled in 2001.

On 26 September 2008 an international seminar will be arranged to discuss the form and interpretation of contemporary memorials.

Exhibiting artists and their works:

Lida Abdul (b. 1973 in Kabul, lives and works in Kabul) touches on Afghanistan’s bombed-out cultural heritage in poetic, contemplative video works. In Clapping with Stones (2005) the viewer can see 20 men in black tunics ritually beat rocks against each other in the Bamian Valley. Echoing from the mountains, the act can be viewed as an attempt to give voice to the rocks, letting them tell what happened here in 2001 when the Taliban destroyed the two Buddha statues thought to have protected the place since the 400s.

Christian Boltanski (b. 1944 in Paris, lives and works in Paris) creates installations on the themes of memory, death and loss, most especially in relation to genocide. Special attention is devoted to the clothes, photos and other personal effects left behind by the victims, objects that Boltanski calls “small memories”. The exhibition includes the installation La Fête de Pourim (1989) and Reliquaire (1989) which both comprise metal boxes, black-and-white photos and lamps – all artefacts and materials that are typical features of Boltanski’s work.

Jon Brunberg (b. 1964 in Stockholm, lives and works in Stockholm) has since 2004 developed plans for a memorial complex comprising an interreligious centre, a research centre and a memorial with space for the names of the approximately ten million persons who have died in acts of war since 1945. This exhibition provides visitors with an early opportunity to share the artist’s vision in full scale. In the Park of Wanås, they are offered tours of the virtual model of the memorial, guided by a map or by the artist himself.

Matthew Buckingham (b. 1963 in Nevada, Iowa, lives and works in New York City and Malmö, Sweden) presents a prediction of what geologists believe Mount Rushmore, the mountain that is home to the USA’s most famous monument, will look like 500,000 years from today. Buckingham’s work The Six Grandfathers, Paha Sapa, in the Year 502,002 C.E. (2002) consists of a timeline that tells the story of the metamorphosis of the mountain from a sacred site for the Lakota Sioux to a national monument.

Ann Böttcher (b. 1973 in Bruzaholm, Sweden, lives and works in Malmö) presents a new work that explores Swedish nationalism’s infatuation with handicrafts, nature and tradition. The work consists of a long-pile rya rug produced by Handarbetets Vänner (the Association of Friends of Textile Art) founded in Stockholm in 1874. The rug is based on a motif from a Holiday card sold by the Swedish National Socialist Bloc in the 1930s. The work emphasises that we cannot change our past but rather should attempt to reach for awareness of all its parts – even the most atrocious.

Sophie Calle (b. 1953 in Paris, lives and works in Paris) visited a number of places in former East Berlin in the mid 1990s which, prior to the fall of the Berlin Wall, were emblazoned with official symbols of the GDR. Her work The Detachment (1996) consists in part of photographs of these empty surfaces, in part of interviews with local people whose fragmentary, contradictory and personally coloured memories are all that remain of these monuments since they vanished.

Regina José Galindo (b. 1974 in Guatemala City, lives and works in the Dominican Republic) uses her own body as a medium for expressing political discontent. In a video recording of her performance work Who Can Erase the Traces? (2003), the artist walks from the Constitutional Court to the National Palace in Guatemala City, carrying a bowl of blood into which she occasionally dips her own bare feet. This work was performed shortly after the former dictator Efraín Ríos Montt had been endorsed as a candidate in the nation’s presidential election. The artist’s bloody footprints along the city streets serve as a memorial to the tens of thousands of people who fell victim to Ríos Montt’s military regime in the early 1980s.

Alejandra Lundén (b. 1960 in Santiago, lives and works in Stockholm) has been working since 2006 with a memorial to the children who have died as a result of the conflict between Israel and Palestine. The work comprises hand-made building blocks by the artist and engraved with the names of the children who have lost their lives. By encouraging playful interaction of both children and adults, the artist hopes that her installation will stimulate thoughts about how we build relations, memories and societies. Believing – An Installation with 843 Building Blocks will be updated during the exhibition period.

Zoran Naskovski (b. 1960 in Izbiste, Serbia, lives and works in Belgrade) provides in his video work Death in Dallas (2001) an innovative interpretation of the events surrounding the assassination of US president, John F Kennedy, in 1963. The starting point for the artist’s work is a recording purchased in a Serbian flea market. The recording, made shortly after the assassination, chronicles the news of the president’s death in a manner in keeping with the Slavic tradition of oral history. A song, performed as a decasyllabic ballad to the accompaniment of the ancient single-stringed Balkan instrument known as a gusle, is intercut with iconic images from the day of the assassination and the subsequent funeral.

Emily Prince (b. 1981 in Gold Run, California, lives and works in San Francisco) has since 2004 daily been drawing portraits of the American soldiers who have died in Iraq and Afghanistan. Her collection was shown in what was then its complete form at the Venice Biennale in 2007. Today the collection has swollen to more than 4,521 drawings, a figure that keeps increasing. Through her choice of title, American Servicemen and Women Who Have Died in Iraq and Afghanistan (But Not Including the Wounded, Nor the Iraqis, Nor the Afghanis) (2004-), Prince draws our attention to the inevitable selectivity of any attempt to remember – and its corollary of forgetfulness and omission.

Esther Shalev-Gerz (b. 1948 in Vilnius, lives and works in Paris and Gothenburg) has created a new work for the exhibition, consisting of a clock with two clock faces whose hands move in opposing directions – one towards the future, one towards the past. These twin timepieces, entitled Les Inséparables, is placed on the façade of the Stable, the indoor exhibition space at Wanås, which dates from 1759.

Kara Walker (b. 1969 in Stockton, California, lives and works in New York) has been working for many years with silhouettes as her preferred medium of expression. Like photographs, silhouettes are traces of what they represent. With works such as Untitled (Milk & Bread) (1998), applied directly on the wall, Kara Walker introduces a synthesis of this form of expression’s reliance on memory and the racial stereotyping that has been the historical norm in the USA. Her intimate scenes typically deal with the violence that was employed to maintain racial and gender-based hierarchies during the era of slavery in the USA.

Image: Emily Prince, American Servicemen and Women who have died in Iraq and Afghanistan (but not including the wounded, nor the Iraqis nor the Afghanis), 2004-, 4,302 pencil drawings on paper, 10,2 x 7,6 cm each. Courtesy The Saatchi Gallery, London. Photo: Anders Norrsell

Press preview with lunch: Thursday, May 15 at 11 am
Official opening: Sunday, May 18 at 2 pm
Nicolas Bourriaud, Curator of Contemporary Art, Tate Britain, inaugurates the exhibition