Portrait from a corporate collection of DZ Bank. Over 100 works by renowned artists such as Andreas Gursky, David Hockney, Mario Merz and Thomas Ruff as well as lesser-known talents such as Elina Brotherus or Raissa Venables offer a concentrated overview of the different strands in contemporary art since the 1970s, or, as Martin Seel puts it, the 'imagination of photography'. Curated by Luminita Sabau, Christina Leber, Hubert Beck. 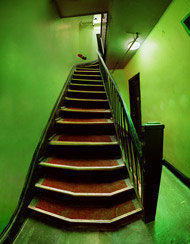 The exhibition title REAL is a conscious means of questioning a cliché that photography has had to contend with since the beginning. A notion of privileged truthfulness was attributed to it -- without hesitation the camera’s lens system was considered to be ‘‘objective.’’ Photography became a replacement for reality, virtually a justified, objective portrayal of it.
In what Paul Virilio has termed the ‘‘visual intoxication’’ of the present, artists reflect in particular the conditions of perceptibility of realities moving at an accelerated pace. It seems that they are still engaged with repeating the history of painting with the means of photography and at the same time are concerned with its continuation. What could be more relevant here than both playfully and obviously using traditional generic concepts in an exhibition of the DZ BANK’s key works in a museum where this history is presented in a prestigious setting. Following this principle, we have developed a concentrated, but open exhibition with six distinct zones:

In Kevin Clarke’s portraits, traditional perspectives on portrait painting meet current scientific insights under an extended concept of the portrait. Clarke rejects the physiognomic representation of an unmistakable individual in favour of the much more precise method of classification based on genetic coding. Katharina Sieverding’s large self-portrait in the Renaissance portrait tradition is an early example of the current significance of masquerade and self-assurance. With her models, Marie-Jo Lafontaine holds a dialog on the limits of the individual and the extent to which it can be illustrated. Wolfgang Tillmans and Dennis Adams take the power of the media as their theme, each in different ways. The visible newspaper grid in Adams’ work underlines the stereotype and the ubiquity of media images, taking Patricia Hearst as an example, whose person appears and simultaneously disintegrates in the indicated interrelationship between media, politics and society. Tillmans’ sensitive photographs portray the subjective image of a generation and a milieu which he himself belongs to. In the black-and-white photos by Seydou Keïta from Mali, in which the traditional portrait and commercial portrait photography meet, on the one hand the floral backgrounds clear the scene for archaic patterns of masculinity and femininity, on the other hand they make reference to a national subtext of a new African self-awareness. A mutual basic tension between the depths of the soul and the surface structure runs through the constellation of these very different studies of the genre of the portrait, which also shows us the great extent to which the body itself is a visual medium today.

In the cityscapes and architectural representations, works range, in line with our current life in the cosmopolitan city, from a veduta from an airplane perspective (Balthasar Burkhard’s Mexico City) and a fire escape in New York (Lorna Simpson) to a street at night in Krakow (Craigie Horsefield), which calls to mind Charles Dickens’ London. These works enter into dialog with views of post-modern and modern architecture by Hiroshi Sugimoto and Thomas Ruff. In this context, Edgar Lissel’s Olympiastadion, which he took with a pinhole camera, not only especially comes into its own, but it also becomes clear to what extent contemporary artists deal with the city and architectural history.

The same goes for the interior. Here, more well-known positions such as those of Thomas Struth, Candida Höfer and Jeff Wall meet those of younger artists including Raïssa Venables and Elina Brotherus, for example. Exciting correspondences unfold between the works of Thomas Demand and Günter Förg, which were created using very different approaches. Certainly not coincidentally, this group includes many works including stairs/staircases as their theme. To give just one example, Delia Keller adopts it in her work of 2000 in a reinterpretation of Oskar Schlemmer’s Bauhaustreppe (1932).

While the landscape in Jörg Sasse’s work disappears in a cloud of speed in a kind of frantic standstill, virtual alternatives of equal value emerge on the one hand as ideal landscapes, as in Beate Gütschow’s work, or as visibly constructed worlds on the other, as in Caroline Dlugos’ work, in which she has digitally assembled the picturesque landscape with its postcard-blue lake and charred tree. Tacita Dean deconstructs a painted seascape she has come across only to then more or less recreate it subjectively as a photograph in an structured grid. With its elements of panorama and cinematography, it clearly makes reference to the early history of the medium in the context of the nineteenth century. In the meantime, Axel Hütte transforms real landscapes of the Rio Negro into memory pictures of a paradise believed to be long lost.

The first genre paintings or everyday scenes appeared around 1500 with the development of Realism. And today, they are more topical than ever, as the examples of the fifth section demonstrates -- be it Andreas Gursky’s stock exchange pictures or the milieu studies taken in Lapland by Esko Männikkö and Andy Warhol, the title of whose series, namely Social Disease, could easily be applied to the entire room. Chambre Close by Bettina Rheims in a Parisian hotel and Boris Michajlov’s Soviet bathing scenes seem like opposite poles of social reality, however the relevant relationship of the artist to the milieu portrayed is of decisive importance in both. In contrast to traditional genre painting, contemporary artists highlight especially the break between man and place. Individual motifs in Männikkö’s work already mark the transition to the next section and clarify, with examples, the smooth transitions between the different sections of the exhibition, which, incidentally, visitors do not necessarily have to follow only on the described path.

Still lifes in all their diversity, allegory, in the end they remain that which they always were, namely, symbolically encrypted messages of longing to overcome transience, as in Nobuyoshi Araki’s work, longing for the contradiction of nature and culture to be resolved, as in Mario Merz, or symbols of the soul and the air as one of the ‘‘four elements,’’ like the fluttering wings of the birds in Sanna Kannisto’s work. Precisely the last two examples attest to the range of techniques, motifs and aesthetic qualities with which the artists in this genre work.

Perhaps, when viewing the pictures in this exhibition, a photographic privilege will become apparent, namely that it enables us to start to understand the world which has been derailed as if it were a film or a story of fragments lined up in rows. In any case, the wish we all share to capture the world in a picture, in pictures, will become tangible. The artists, as model observers, do this for us: opposing the great disorder with one’s own order, as Harald Szeemann once put it.

Luminita Sabau, head of the DZ BANK art collection and curator of the exhibition