A series of off-site works and performances taking place across central London during months of June and July 2008. All participant have previously conceived works for public locations and frequently cooperate with other individuals or groups. Their works suggest different means of sharing and remembering, uncover ways in which power is embodied and performed and test the limits of the prescribed and self-regulated ways of expressing oneself in public. 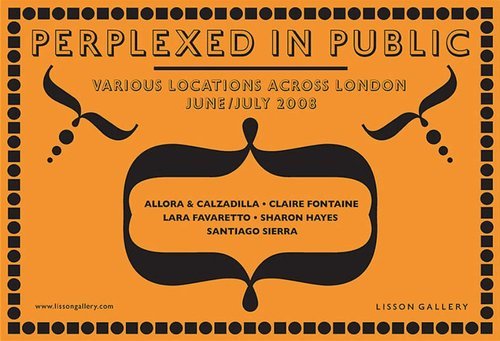 Perplexed in Public is a series of off-site works and performances taking place across central London during months of June and July 2008.

The project brings together a select group of international artists whose practice is often the aesthetic manifestation of a will to express a position within the world, whilst generating an exchangewith an audience – be it an informed public or passers-by. All participant artists have previously conceived works for public locations and frequently cooperate with other individuals or groups. Their works suggest different means of sharing and remembering, uncover ways in which power is embodied and performed and test the limits of the prescribed and self-regulated ways of expressing oneself in public.

As well as sharing a similar desire to articulate a voice within a public context, the works presented under the umbrella of Perplexed in Public adopt strategies that open spaces of disturbance and distraction, or frame the setting of a blurred reality or ambiguous scenario. The title of the project comes from Lawrence Weiner, who has recently commented that the concept of being an artist was for him to be 'perplexed in public', because the artist's role 'was to be invested in things that did not have a pat answer' (1). In this respect, Claire Fontaine has written of the ability of art to create an interruption, a 'salvatory defamiliarisation' that can be a source of newfound understanding and affects (2). The 'process of becoming stranger' – of encountering a work or a situation that generates suspension and estrangement – has the revolutionary potential to subvert one's perception of oneself and of one's own possibility of power.

Perplexed in Public engages with public sites chosen for their symbolic and historical significance. The aim is to foster a debate that is central to the work of the artists invited as well as to the history of London: the use of public space and the engagement in actions of self-expression and manifestation of dissent. Forty years after 1968, the utopian and somewhat naïve stance of the
60s and 70s has dissipated. Nevertheless, by generating and sustaining situations of tension or exchange among viewers, participants, and context, art can expose the permeability of the boundaries and unwritten rules that regiment social relationships and the use of public space. Denying viable alternatives and creating situations of dysfunction, protest or contrasts, the artworks presented refuse easy answers and articulate in poetic and challenging ways the position of those willing to engage in today's society.

The work of Santiago Sierra (b. 1966, Spain) often takes the form of ephemeral or temporary interventions. Adopting a minimal language, the artist creates ‘incidents’ that highlight the existence of situations of conflict
and address structures of power that operate in our everyday existence. The essence of the work is often in the tension generated and sustained between the event or its documentation, and the spectator. Examples
span from Obstruction of a freeway with a truck’s trailer, Mexico City, 1998; to Raising of the windscreen wipers of the cars found parked during a one-hour walk, Dublin, 2001.

4000 Black Posters creates a situation of visual contrast and antagonistic presence in the urban space. For a period of two weeks, black monochrome posters will cover all available sites in Brick Lane and Shoreditch. Devoid of any visual material or text, Sierra’s work functions as a powerful statement, addressing the way in which we share information and communicate within the public arena, while pointing at the overwhelming lack of space for unregulated self-expression. The colour black is highly symbolic and generates associations
with ideas of silence, negation or suppression of communication, and censorship. As part of the work black posters can be collected from Lisson Gallery for fly-posting.